Thai Green Curry, the Authentic Way, and Shopping in Ethnic Markets
Pimm's Cup, for the summer 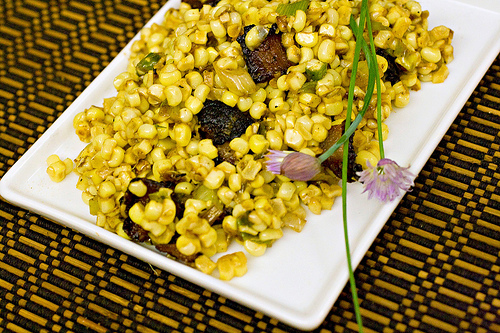 I have been waiting for summer to start since June. But June Gloom deepened into July Gloomed, followed by an August that was generally lovely but far more temperate than this Southern California girl was used to. My tomato plants were uncharacteristically subdued, my peaches never ripened, and All this time I’ve been waiting for the long stretch of hot days, the salad weather, the BEACH weather. But now it’s September 23, and by all accounts summer is officially over. We are moving into apple season, people care that there is a shortage of canned pumpkin, and dinner by the fireplace is starting to seem more appealing than dinner on the deck. So this is a last gasp summer recipe. Celebrating the bounty of the summer that wasn’t. But even a cold summer has its consolations, and one of those consolations is corn. Corn on the Cob is a classic of course, but as a gaptoothed child and later an adolescent with braces, I never really liked gnawing the kernels off the cob. I prefer the flick of a sharp knife and the resulting flow of kernels, with nothing coming between your mouth and bursts of starchy sweetness. Of course, once the corn is off the cob, you can start to experiment with flavors besides just butter and salt. I like sauteing the kernels with some butter and hot sauce, or doing a lime juice, mayonnaise and cheese based elote. But the most decadent corn dish I’ve tried, the one that was like corn on crack with almost overwhelming umami, is David Chang’s Roasted Sweet Corn with Miso Butter from the Momofuku Cookbook. This isn’t that recipe. I did make it once, and it was delicious, but it involved making four separate recipes (and I even fudged one of them) to combine into one dish. What I’m giving you today is an adaptation — lighter and more streamlined, but just as delicious. You still get the incredible umami hit from the miso, the sweetness of the corn, and the smoke of the bacon, but this takes only a few minutes to make, and dirties far fewer dishes.

And if your summer has come and gone, you can make this with frozen corn. The beauty of cutting corn off the cob and tarting it up is that you end up with a year round dish, and your summer can go on and on and on.

Corn with Miso Butter and Bacon