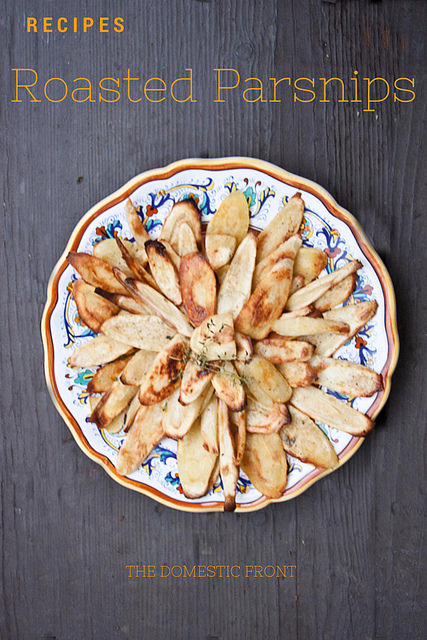 The first Thanksgiving dinner I was responsible for was during my junior year of college.  I was studying abroad in London, and our program head offered to purchase ingredients and offer up the kitchen (in a beautiful, 18th century row house) if my roommate Molly and I would do the cooking for our whole group.   Knowing that we were unlikely to get a real American Thanksgiving Dinner elsewhere in London, we agreed.

Then the requests started pouring in.  Every American in our study abroad program had a different idea of what constituted proper Thanksgiving dinner.  A only had canned cranberry sauce, M only had homemade cranberry sauce.  K wanted cornbread.  B wanted roasted potatoes, E wanted mashed potatoes (and I, of course, wanted stuffing).  The Brits had their own ideas of what a proper turkey dinner consisted of  – bacon-wrapped turkey (which in retrospect sounds delicious), tiny sausages called chipolatas, and parsnips.  Now, I had never had a parsnip before (Dad hated most vegetables – we ate a lot of salads growing up), but Molly and I opened up one (or two) of the excellent bottles of wine provided by the program director, put some of our peers to work peeling vegetables (including Ken, whom I had just started dating), and tried to meet everyone’s requests.

I think we were fairly successful, but frankly, there was enough wine while we cooked that I don’t remember much about that Thanksgiving dinner.  I do remember loving the roasted parsnips.  Nutty and sweet like carrots, but with a more herbal, fragrant note (almost like celery root, but without that celery flavor), they’ve become one of my favorite root vegetables, and I’ve roasted them many times in the years since that first Thanksgiving.

If you, like the 20 year old me – have never seen a parsnip, they look like albino carrots.  Except that  some look like albino carrots, and some look like deformed albino carrots, with really thick stem ends and really thin root ends, which makes them effing hard to cut into carrot stick like shapes which is the received standard method of cutting parsnips for roasting. (don’t believe me?  Google image search “roast parsnips”.  See?)  I would always get frustrated because by the time the big fat pieces cooked through the little skinny ones would burn, and while I like some textural variation, that is too much.  Also, parsnips are a little less crisp than carrots, and can be hard to cut evenly, exacerbating the problem.

Then, while pondering how I was going to share this vegetable with you, my gentle readers, from whom I have been withholding parsnipian glory for too long, I hit upon a BIG IDEA –  using my Mandoline

(affiliate link)  to slice the parsnips into “chips” of exactly even thickness, which would in turn cook evenly.  I set the mandoline to the widest thickness (about 1/4 inch), and using Cut Resistant Gloves

(affiliate link), which are absolutely essential when slicing any vegetable with the Benriner, but especially so when that vegetable is a bit woody and you are slicing it thickly, at least if you are attached to your fingerprints, made quick work of 2 pounds of parsnips, and the result was the beautifully roasted vegetables you see above.    So much easier than fiddly knifework!  (Also, easier to eat).  Also, if you are moderately psycho or a food blogger (which, in fact, may be a redundant statement), you can arrange them into a pretty petal shape like a sunflower. 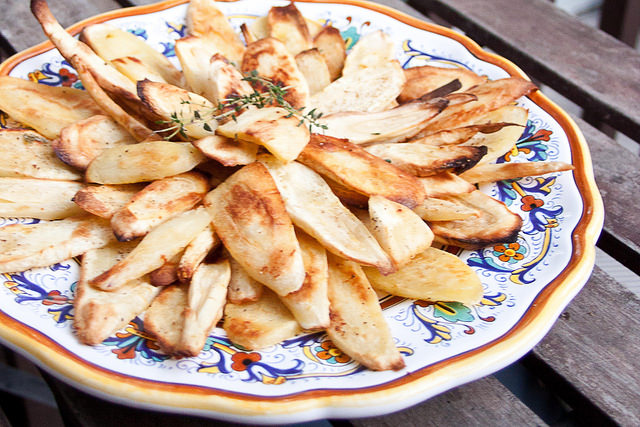 I don’t claim to have invented roast parsnips, but, at least if Google image search isn’t lying, I can say I’ve made them better.  So if you are a lover or root vegetables, want to add a touch of Anglophilia to your most American of feasts, or just like to eat food, make these parsnips!