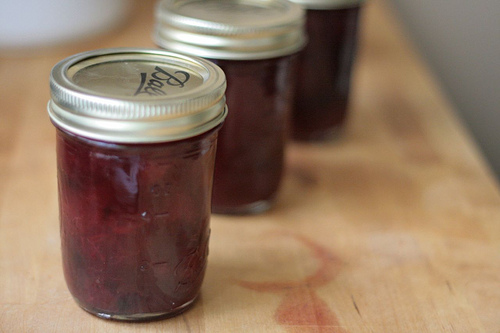 I have a confession to make. I have not been entirely truthful with all of you. I have been cooking this summer, but not dinner, and not dessert. I have been making jam.

I understand jam making to be the latest trend among “hipsters” (google “hipster” and “canning” and you’ll see what I mean.) I never really thought of myself as a hipster, I mean, I’m certainly not a hippie because I don’t like hiking or Phish, and I can’t be a yuppie because it’s not 1987, so I turned to Urbandictionary.com to determine if I am, in fact, a hipster. A quick skim of the 138 definitions of hipster yields a person in their 20’s or 30’s (yes) who lives in Brooklyn (no), values “creativity, intelligence and witty banter” (yes), drinks a lot of Pabst Blue Ribbon (no), sports “high cultural tolerance and a slight tendency towards intellectual arrogance” (yes), is too ironic for their own good (maybe), and is cooler than cool (heck no).

I am still confused. What I am not confused about is this: making jam is a) fun b) easy and c) cool (which may be the hipster connection. I’m certainly not putting PBR into my jam). There’s something special about those little jars of homemade preserves, all lined up, ready to be eaten, or given away as gifts, or, if you have a packrat nature (like nobody I know, nosirree) to be stored in the pantry and gazed at lovingly. My husband makes fun of me, pointing out that I have an Ivy League education, am admitted to the Bar in two states, have a successful career and yet I am proud of making jam, something his great-grandmother did on a regular basis without much fuss. So sue me. I’m proud of my jam. I love my jam. I bid thee to go forth and make your own jam. You won’t be sorry. There are two parts to canning jam, both of which can be intimidating — the cooking of the jam and the canning for preservation. On the first point, here are a few tips: use the peels of the fruit — they tend to have higher pectin (the stuff that makes the jam jammy, rather than syrupy), cook it longer than you might think (it’s really just candy – use a candy thermometer to 220 degrees, or cook until it starts to firm up on a cool dish), and use commercial pectin if you’re either using a low pectin fruit (like rhubarb) or are worried about the jam factor (I don’t mind if my jam is a little runny, myself). On the canning part, calm down! I know there are a million botulism horror stories out there, but jam has a slightly higher margin of error, since it is so acidic and so sugary, both of which help preserve the jam and make it less susceptible to bacteria. Also, the process really isn’t difficult, though it helps to have a few good tools, like good tongs, and a rack that fits inside your biggest pot. I found this canning kit

at Amazon to be reasonably priced and very useful, and the rack fits perfectly into my 8 qt. stockpot. Take those little half pint jars with the lids and the separate rings and pop them in boiling water for at least 10 minutes, but you can just leave them in there while you’re cooking the jam. Fill the hot jars with hot jam, leaving 1/4 inch of space, wipe the rims with a clean damp towel, then put on the lids and the rings and boil the jar in the boiling water for another 10 minutes. (The jars shouldn’t touch the bottom of your pan, which is why a canning rack comes in useful, and the water should cover the jars). Let the jars cool overnight (you might hear a “pop” as they seal) and then store them without the rings (so you know if you have a bad seal). I’ve found a good rule of thumb is that a pound of fruit makes about 1 jar of jam, and I tend to make no more than 4 at a time. I also like to make jam that’s harder to buy in the stores — the recipe below is for plum jam, which is unutterably delicious but nearly impossible to find at the A&P. If this is too much for you, you can just make the jam and keep it in your refrigerator. If you can it, you can save it forever and ever and pull it out of the pantry periodically to gloat over. What? Doesn’t everyone do that with jam? It’s also excellent on toast, over some Greek yogurt, stirred into oatmeal or filling a crepe.

The only problem is that once you start making jam, you’ll probably be hard pressed to stop. My pantry is getting full. But at least I can make it through the winter.