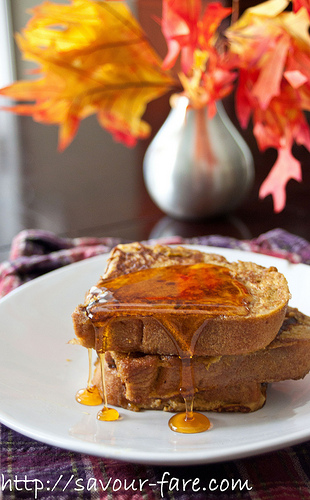 I knew, when I moved back to California from New York, that I’d be losing fall. Fall in the Northeast was my favorite season — the crisp air, the brilliant colors, the smell of rain. I was always eager to don my sweaters and pull out the soup pot. We do get a semblance of that fall in Southern California — it just arrives in November or December and lasts until February.

September this year has been especially trying. I know intellectually that September is the hottest month of the year. But the seemingly endless string of days over 90 degrees are making me yearn for autumn relief more than usual. I am tired of grilled chicken and gazpacho. I want sweaters! Brussels sprouts! Bean soups! But really, the idea of eating bean soups when it’s 103 in the shade is … off-putting.

This french toast, then, is my brave attempt to bring a little autumn to my life. The Nuni loves french toast, and while pancakes seem daunting even for a weekend breakfast, I’m always up for a quick egg soak and a fast saute. The five cans of pumpkin puree in my cupboard (we can call it what it is — aspirational pumpkin) inspired me to spice up my usual quick and easy French toast with a little fall flair. I thought that pumpkin pie filling is really just pumpkin added to eggs, cream, sugar and spices — change the proportions slightly and you have the perfect soak for french toast. After all, I may not feel like turning on the oven, but I can handle 10 minutes on the stove.

The scent of pumpkin and ginger and cinnamon gives me hope that a little bit of fall is just around the corner. I may even pull a sweater out tomorrow. A linen sweater. Baby steps. Pumpkin Pie French Toast, or the Hope of Autumn