So let’s talk about bacon. Apologies to my Muslim, kosher and vegetarian friends, but I’m going to level with you — Bacon is good stuff. Smoky, salty, a little sweet, with an edge that can only be described as “porky”. And the aroma! The smell of bacon frying is one of the most intoxicating scents in the world. It makes your mouth water just thinking about it, doesn’t it?  Take that bacon thought and add sweet chocolate and deep, dark, slightly salty caramel and you get the ultimate in guilty pleasures – these bacon salted caramel brownies. 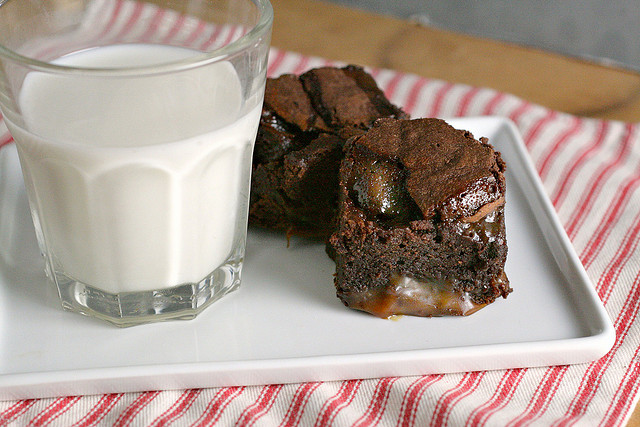 Bacon has also become ubiquitous. Whether it’s “home cured pork belly” at a fancy restaurant, or hiding in vegetables, pastas, or chicken noodle soup, bacon has become the it ingredient. It’s even showed up in desserts — the maple bacon doughnut at Voodoo Doughnut in Portland, Oregon was probably one of the earliest examples, but a quick browse through Tastespotting will reveal recipes for bacon brittle, bacon snickerdoodles, bacon cupcakes and even bacon macarons. I wish I could be all foodie snob and turn up my nose and say “Bacon is so DONE. It doesn’t actually go with EVERYTHING,” but the truth is that I, too, have been seduced by the beast. You may have noticed bacon popping up in recent and not-so-recent recipes, but I have never crossed into the dark side to feature bacon in a dessert. 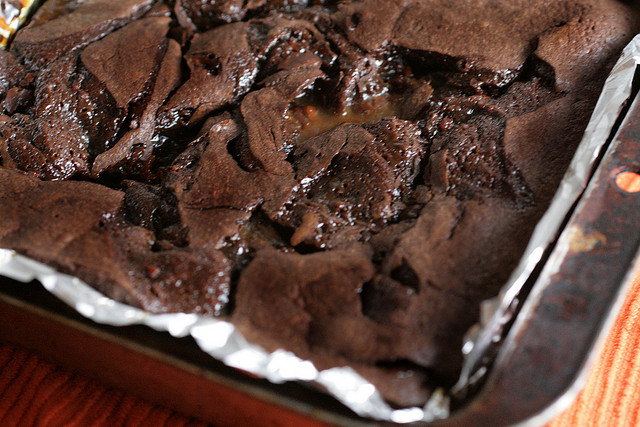 Bacon Salted Caramel Brownies. You may be skeptical. I was. Bacon in a dessert? And a chocolate dessert? Bacon doesn’t make EVERYTHING better. But my friend Rebecca happened upon this particular flavor combination when a colleagues dulce de leche brownies were put into a lunchbox with a bacon sandwich, and the aroma of the bacon flavored the brownies. “You must make these,” she said. And the idea struck a chord in my mind. Bacon Salted Caramel Brownies. Maybe it was a Twitter chat hosted by Scharffenberger chocolate, or a girlfriend telling me that David Lebovitz had told her that if she were going to try any one of his recipes, it should be the Dulce de Leche Brownies, or Alice Currah’s Bacon Caramel Bar recipe, but Bacon Salted Caramel Brownies appealed to me, and I couldn’t get them out of my head.

I started by frying some bacon, with its crisp crackle in the pan. And then I added it to my favorite salted caramel recipes, and infused the caramel with the scent and flavor of the fried rashers. And then I added the bacon (although it was all I could do not to eat the caramel covered bacon all on it’s own. And then, I made Mr. Lebovitz’s excellent brownies recipe, and added thick, rich dollops of salty, sweet, slightly bitter caramel, all suffused with the smoke and meatiness of bacon. These aren’t just brownies any more. And they’re not a novelty dessert. They’re something else entirely. 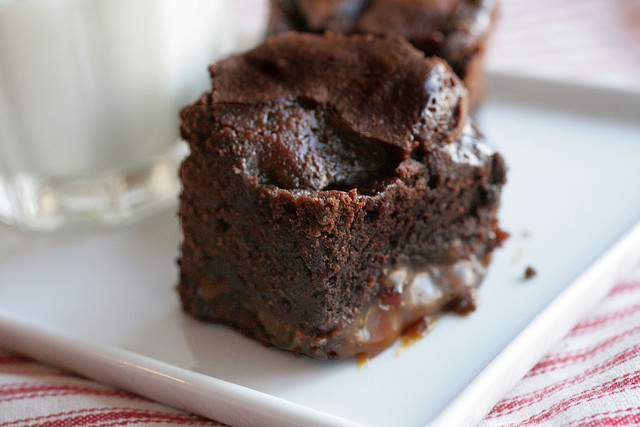