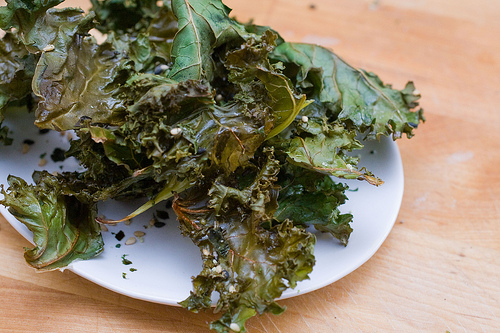 There seems to be this idea out there that kids will not eat vegetables. There are suggestions to disguise the vegetables as trees, or puree them and hide them in the brownies. I just don’t get it. Sure, some kids are neophobes — they will view anything unfamiliar with suspicion. And some kids won’t touch anything green. But I think it’s our job as parents not only to get them to EAT vegetables, in some sneaky and underhanded manner, but to actually get them to like vegetables, as vegetables. That’s going to serve them a lot better in life than never eating spinach unless it’s part of a cupcake.

The challenge is in how to do that. And there is no answer that works for every kid. Try different things. Prepare vegetables in different ways. Try roasting them, or sauteeing with a little bacon, or serving a salad, or baking into a lasagna. Let them dip the vegetables in ranch dressing, or cover them with a cheese sauce. If they don’t like green vegetables, cook carrots or cauliflower or pattypan squash. Make vegetables, in all of their wondrous variety, a part of their life.

Before you run screaming for the hills, don’t think that the Nuni is sitting there saying “How about some cardoons for Sunday brunch today, Mom?” She’s not a great eater in general in terms of quantity, and macaroni and cheese or ice cream tend to be more successful than bell peppers and eggplant. (And I fully admit that there have been nights when dinner WAS ice cream, ideally washed down by a vitamin and some green juice from Trader Joe’s (that stuff is magic — it looks like pond scum, but tastes like bananas and mangos, and has things like spinach and seaweed in it). But I keep trying. I serve her the veggies she’ll reliably eat, like carrot sticks and raw broccoli, and I keep trying new preparations on her. And occasionally, I hit gold.

Last week we were driving home, carrying on our typical patter “Who did you play with today? What books did you read? What do you want for dinner?” (the answer is usually “Macaroni and cheese, because that’s a dish she remembers), when she suddenly piped up “I want kale for dinner.” Kale? My child wants kale? Not one to miss an opportunity, I stopped at the Whole Foods on the way home to pick up some kale, and rushed when I got home to prepare these kale chips. I don’t know what genius had the idea to basically dehydrate kale in the oven, but our household has cause to be thankful this winter. Kale, with its curly, almost crisp texture, bakes up into addictive, crunchy chips, that shatter when you bite into them. And they’re completely simple to make — remove the thick central veins, tear the leaves into bite sized pieces, toss in a little oil and vinegar, and bake for about 15 minutes. The only challenge is getting them uniformly crisp, but I actually like the texture variations when some are chewy and some are crisp. Finally, I finish them with a little sea salt and furikake, whose seaweed sesame flavor compliments the kale perfectly.

With vegetables like these, who needs to hide them?