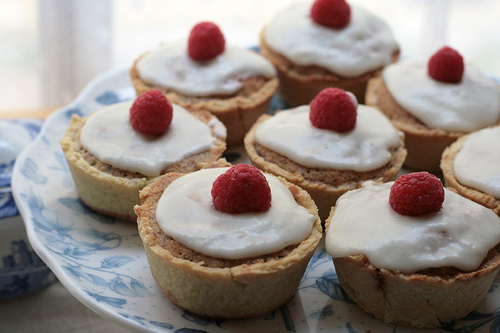 Have I ever mentioned that I am a raging Anglophile? I jealously hoard Colman’s mustard, studied abroad in London, wrote my undergraduate thesis on franchise reform in Parliament, and pepper my speech with phrases like “jolly good” and “lovely!” I blame it on a childhood reading the great English children’s books — Winnie the Pooh, Mary Poppins, Ballet Shoes, The Lion, the Witch and the Wardrobe, Five Children and It. All of them full of funny names (how many of you know someone named Anthea?) and verbal expressions and best of all wonderful food (usually served at teatime) – Victoria Sandwich, Gingerbread stars, and who can forget Turkish Delight? Because of this, I look askance at anyone who roundly condemns English cuisine. Overlooking the horror that is mushy peas (I said I was an Anglophile, not actually English), Britain has made many delectable contributions to world cuisine — mince pies, cheddar cheese, Branston pickle and these delectable little Bakewell tarts. Author:
Kate Wheeler
Serves: 8
Prep time: 45 mins
Cook time: 30 mins
Total time: 1 hour 15 mins
Print
I give you Jasmine and Annemarie's recipe verbatim here, and I'll note my modifications at the end.
Ingredients
Sweet shortcrust pastry
Frangipane
Instructions
Assembling the tart
Sweet shortcrust pastry
Frangipane
Notes
Kate's Notes: I used commercial almond flour made from unblanched almonds. It didn't affect the texture, and was much easier than making my own. I added the zest of one lemon to my shortcrust pastry, because I love the combination of raspberry and lemon. I happen to have a commercial raspberry jam that I love, but feel free to experiment or use homemade. I also made these in muffin tins -- I cut a circle out of the dough, then rolled the circle even thinner, and trimmed it once in the tins. Put about 2 T of jam in each cup, and 4 raspberries. This was enough to make 12 mini bakewell tarts with leftover frangipane. Once they were cool, I topped them with an icing made from 1 oz. butter, 2.5 oz. powdered sugar and the juice of half a lemon.
3.2.1596
The June Daring Bakers’ challenge was hosted by Jasmine of Confessions of a Cardamom Addict and Annemarie of Ambrosia and Nectar. They chose a Traditional (UK) Bakewell Tart… er… pudding that was inspired by a rich baking history dating back to the 1800’s in England. Many members of the Daring Bakers had never heard of Bakewell Tarts before, but, thanks to my university days, was familiar with them as jam and almond tarts in a shortcrust pastry. More particularly, I was familiar with these, from Mr. Kipling (the British equivalent of Little Debbie or Hostess):

The recipe Jasmine and Annemarie provided was a far cry from these packaged wonders, with crisp short pastry topped with jam and homemade frangipane, an almond-based cross between cake and custard. Being me, I couldn’t resist tarting up the Bakewell, and making a reference to Mr. Kipling’s classics, so I added fresh raspberries in addition to raspberry jam and a slick of white icing. I wouldn’t say these were easy to make — I have a generalized fear of rolling — but they weren’t difficult either, and the flavor more than made up for the effort. These are a perfect treat to enjoy with a cup of tea and a good book.