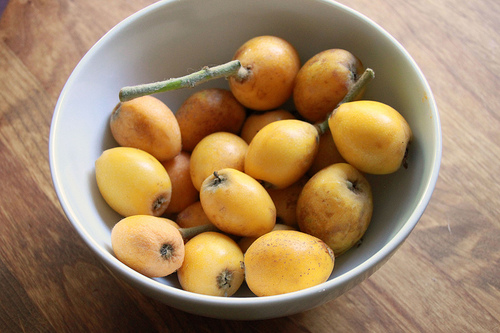 I will admit the traffic sucks.  And the home prices are insane.  And yes, we have earthquakes.  And fires.  And floods.  But I can’t escape the feeling that living in Southern California is like having won the lottery.   With the fruits and flowers, the birds and the animals – I do believe that it’s not too far from living in the Garden of Eden.  And this month’s bounty has been loquats.

If you don’t have a backyard tree, you may never have had a loquat.  They’re a fruit that’s related to the quince and the apple (both of which we’ve planted in our yard) that originated in China.   They are small ( about the size of a large walnut), orange, and juicy, with large (but very pretty) seeds.   And when your loquat tree is bearing, you have a wealth of loquats.  (If you can beat the squirrels to them.) It’s rare to see loquats in the market — the bruise extraordinarily easily – but if you’re lucky enough to have a tree (or a neighbor with a tree, or a friend with a tree) they’re also extraordinarily easy to grow.  The flavor isn’t remarkable but is nice — a good balance of sweetness and acidity with a lot of juice.  They’re easy to peel (although the peels are also edible) and although the ratio of fruit to pit is lower than the ideal, the pits are easy to remove.  They’re good for eating out of hand, or if you have some patience to peel and pit, it’s worth cooking with them too.

When faced with a bounty of loquats, I turned for ideas to my friend Erika Penzer Kerekes of In Erika’s Kitchen, who is  a loquat queen.  She advised jam, but also said she had made a very good loquat crisp recently.  I wasn’t up for canning, but the following crumble was short work (if less than perfectly photogenic) and really showed off the flavor balance and juiciness of this great backyard treasure. I went with the “tropical” theme and used macadamia nuts in the crumble (Trader Joe’s has recently started carrying chopped macadamias), and the loquats really let the flavor of the macadamia nuts shine through.  You can substitute finely chopped almonds if you prefer. If you don’t have access to loquats, you can substitute in another fruit with a lot of juice and a nice balance of sweetness and acid — I’d recommend apricots or plums.  Cherries would work too.

From my Garden: Loquats, and a Loquat Crumble Recipe