As I detailed in Part 1 of my kitchen saga, when we moved into Stratford House, we had a perfectly functional but not to our taste kitchen. While it’s not in the budget for a while to change the dark wood cabinets, the brass hardware, and the green silestone countertops (Green? WHY?) I could take a little time to fix up the eating area, make it more to our taste, and lighten the entire feel of the room.

As a refresher, here’s the less pathetic before picture: I’ve already gone into details about the kitchen table, so this post is about everything else. At least, everything else in that corner of the kitchen. Except the blinds. Which aren’t my favorite, but are useful. But I digress.

First, the Cushions. There were existing cushions, covered with a black floral tapestry fabric, which had the following advantages: it showed no stains and … well, that’s about it. Oh wait, it was durable. At first I toyed with having new cushions made (OUCH — this is a LONG bench, and we are talking beaucoup de $$), then I considered having them reupholstered (again, very spendy, not to mention the trouble I’d have finding an upholsterer to take such a small job.) So I decided to forgo piping and turn to the trusty singer sewing machine and $40 of fabric from fabric.com. I chose a black and off white striped ticking (the off white was a little more subdued than a bright white would have been, and I think there’s enough green in the kitchen as is), measured and pinned around the existing cushion stuffing, then sewed three sides with the machine. THEN (and this is the REALLY fun part), I closed the back seam by hand (with the entire (awesome) season of Downton Abbey on TV as I went. No, I can’t remove it to wash, but if I REALLY need to I can cut open the stitching, and you can’t see the hand sewing as it is in the back, facing the wall.

Not being totally insane, I only did the bottom cushions, since the back ones kept flopping down anyway, and who really lounges around a kitchen table? I did decide to make a couple of matching throw pillows (I had extra fabric) with feather pillow forms from Ikea. Being totally insane, I decided to make them in a chevron pattern. And while I like the way it looks, it was way more work than necessary. (Also insane, my “styling” with all the lumpiness at the bottom.) The final step (and this is key): A generous application of scotchgard spray on all of the cushions. The lighting also had to go. The previous owners of our house (who are great people, and we should know, because we’re still getting their mail), had an inexplicable fondness for Tiffany Style lamps, which are not Kate-style, as they remind me of a TGI Fridays. And while I drank many a Brazilian Monk in college (some crazy “cocktail” which involved Frangelico, Kahlua and Vanilla Ice cream) I do not in fact want to live in a TGI Fridays. I just don’t have enough flair. Also, the kitchen one was a particularly egregious uplight style, which I detest because it looks like a nipple. Hanging from the ceiling. So the Tiffany lamp had to go. I found this lovely Barn style pendant at Lighting Universe, which is nice and big enough to hide the fact that it doesn’t appear to be centered over anything rational in the kitchen. And I got Ken to install it (with my help) in about 20 minutes one afternoon. (Installing light fixtures is usually one of the simplest DIY home repairs. My good friend Mrs. Limestone has a great tutorial on how to do it here and since I’m too lazy to take pictures of the whole process, I’ll just link to hers.) The light has an exposed bulb, so I got a globe light that’s intended for bathrooms. It doesn’t give a ton of light, but the pendant is mostly for atmosphere anyway (there’s overcabinet, undercabinet and canister lights in the kitchen) so at this point I can live with it.

Remember the incredibly sad and pathetic before? 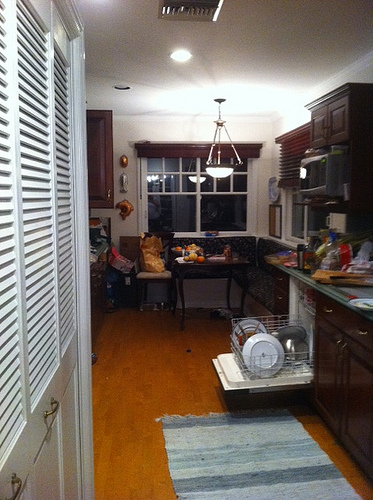 (And yes, you can still see our overflowing recycling bin. We’ve gotten the biggest bin from the city and we fill it up and then some every week. If you have a more elegant solution, I’m all ears.)

And there you have it. One tiny budget, one tiny bit of my kitchen made over. But I have to say, we use the space a ton now. We have weekend breakfast and weekday dinners around the kitchen table all the time. The nuni likes to draw there while I’m cooking dinner, and the dog likes to climb on it (hey, we keep it real around these parts).