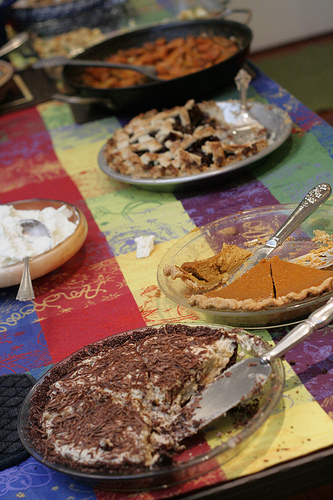 OK. Thanksgiving is tomorrow. Your turkey is brining, your pies are baking. It’s too early to cook the sweet potatoes, blanch the green beans, or roast the turkey. So we have time to cozy up for a nice chat.

The first Thanksgiving I ever cooked without the August wisdom of my mother and aunts was my junior year in college. I was studying abroad in London, and our study abroad program had been kind enough to purchase the fixings for a traditional Thanksgiving dinner and offer to host it at the center where we took classes (which was a gorgeous Georgian terrace house with a huge kitchen). My roommate and I, filled with the cockiness of youth, volunteered to host. Then the requests started. “We’re having mashed potatoes, right? It’s not Thanksgiving without mashed potatoes.” “My family always had roasted potatoes.” (Dramatic sigh) “It’s hard to be so far away from family on Thanksgiving.” “What do you mean you can’t find sweet potatoes in London?” (It was true — things that proved difficult to make in London in 1998 included sweet potatoes with marshmallows, cornbread, and cranberry sauce.) Even the Brits, who by all rights should have had no skin in the game — offered an opinion. “We always wrap our turkey in bacon.” “What do you mean you don’t know what parsnips are? You have to have parsnips with turkey!”

Eventually we shooed them out of the kitchen, opened (several) bottles of wine, roasted the turkey (sans bacon), the potatoes AND the parsnips, mashed potatoes as well, and even managed to get marshmallows and sweet potatoes kindly brought over by my roommate’s parents who visited the week before Thanksgiving. Dinner was a raging success (if I do say so myself), but it’s possible that I had had enough wine that I’m not exactly remembering correctly. There are a couple of photos from that dinner, including one of my then-boyfriend, now husband (wearing what appears to be an undershirt, which he would never get away with now), and we are DEFINITELY a few sheets to the wind.

It was a learning experience, though. Thanks to that Thanksgiving, and a few more I picked up over many years of Thanksgivings, here are some tips I have on hosting Thanksgiving.