Only Connect
The Domestic Front, Everywhere 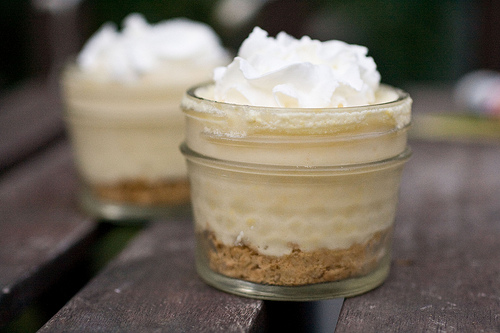 I have this vision of summer. Long, twilit evenings spent outdoors. A cold glass of wine, some fairy lights. There’s music playing in the background. The kids are running around. There’s laughter, and good conversation, and the air is cool. We linger over dinner. The food is delightful — refreshing, light, playful. And then, since nobody wants to leave, we cap off the evening with dessert. Nothing too sweet or too heavy. Just a little something sweet, something light, something fun.

Summer should be FUN.

The reality of summer doesn’t always match my vision. Childhood doesn’t prepare you for the hard, cold, reality that most jobs don’t offer a summer vacation. My summer evenings are often spent in the car, in a long sweaty slog through traffic. I come home to a house that’s 90 degrees (in my fantasy life, I often forget that summer is HOT), and decide whether to open the windows, letting the dubious cooling effects of outside air rush into the house, along with flies, stinkbugs, and of course, mosquitoes, or whether to close off the outdoors, turn on the air conditioning, and cocoon. And get bitten my mosquitoes anyway. Friends are busy, or out of town, and dinner is a ham sandwich, as that’s just about all Nuni will eat these days. Summer reality has its joys – ripe tomatoes from the garden, and the twilights are long. We do eat outdoors. But my reality is that summer also has its aggravations, and isn’t any more fun than any of the other four seasons.

At least dessert can still be fun, right? These tiny pies are fun. First of all – tiny pies? Always fun. Put them in jars and you double the fun (and make them super easy to transport for a picnic or a beach trip — see? More fun.) These are tart and refreshing and, unlike traditional key lime pies, light, low fat and relatively healthy. Lightened with egg whites, tangy with yogurt and lime juice, these mini pies are what summer was meant to be.

I was inspired to make these because, after a meeting of Food Bloggers Los Angeles at my house (which was, I admit it, quite fun, though also quite hot), I was left with a bag of key limes the kind people at Melissa’s Produce gave me, and a couple of tubs of Vanilla fat free Greek yogurt from Stonyfield Farms. Yogurt and limes ends up being an inspired combination.

Author:
Kate Wheeler
Serves: 8
Prep time: 15 mins
Total time: 15 mins
Print
Adapted from Classic Home Desserts by Richard Sax. If you don't have key limes, you can substitute with regular lime juice. I found the best jars for these are little 4 oz. canning jars. You can also pop them in the freezer with the lid on, and either let them thaw in the picnic basket or, on especially hot days, eat them frozen.
Ingredients
Instructions
3.2.1336