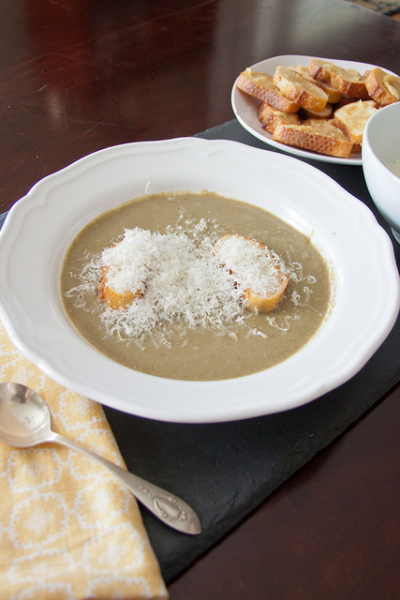 I never think of myself as a soup eater.  When I was a kid, even though I grew up in a foodie family, soup more often than not came from a can, and had water added to it.  It was neither particularly tasty nor particularly satisfying, and I carried that prejudice for a long time.

As an adult, however, who is tasked with feeding the multitudes (i.e. my children) with the contents of my refrigerator, I have come to appreciate soup.  Soup is flexible — you can add the vegetables you have, switch out the base, change the seasonings — and you’ll probably still end up with a good dish.  Soup is forgiving — give me your tired vegetables, your poor meats, and the alchemy of the soup pot transforms them into toothsome delights.  Soup can be stretched to feed more mouths, and frozen and reheated without ill effects.  It can be fed to babies, and sick people and children and made sophisticated for a dinner party.  It can cook a little longer, or a little more quickly, or in the crockpot, or in the pressure cooker.  It might just be the perfect food.

This mushroom leek soup is the perfect example of flexible food.  It cooks up quickly, reheats well, requires very little fuss, and is infinitely adaptable.  If you want it vegan, swap out the chicken broth for vegetable broth and skip the cheese.  If you aim for gluten free, forget the croutons.  If you have a handful of leftover vegetables, you can throw them in the pot.  I added a couple of handfuls of baby spinach because I had it, but it can also be skipped if you don’t.  You can even swap in onions for leeks, but they don’t have quite the same delicacy of flavor.  Many people avoid fennel because they don’t like licorice — here, the licorice notes are all but unnoticeable – the fennel adds a depth of flavor and a hint of sweetness which balances the mushrooms.  For me, accepting soup was tied to accepting my soup personality.  I am not so much a broth-with-stuff-in-it soup person — I tend to prefer smooth textured soups, like this Gazpacho or this Cauliflower soup.  Fortunately, the introduction of a hand blender handles the transition beautifully.  If you prefer a chunky soup, by all means skip the blending step. 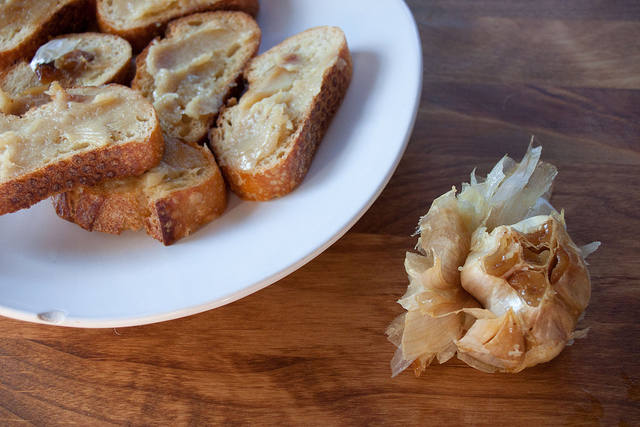 The roasted garlic croutons are also optional, but they (with the cheese) add another flavor dimension.  This mushroom leek soup is hearty enough to serve as a Saturday lunch, or elegant enough to start a fine dinner. 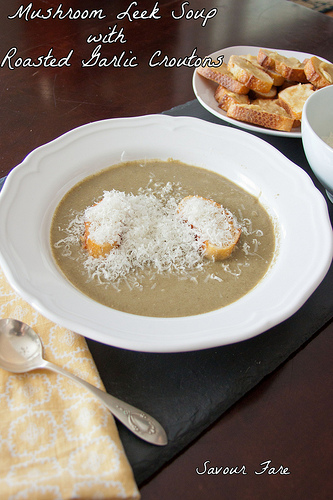