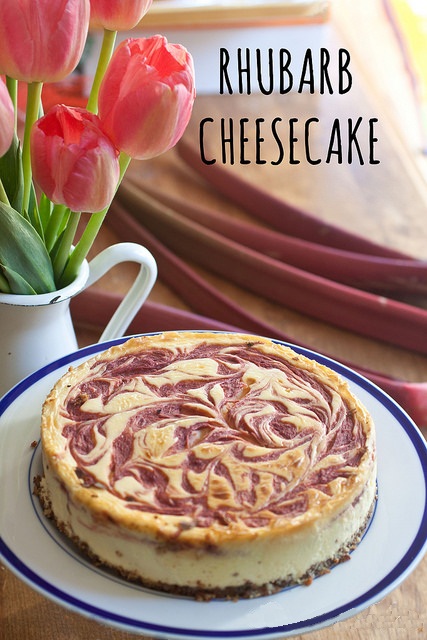 It’s springtime!  Which means rhubarb!   Which means #YARROTDF (Yet another rhubarb recipe on The Domestic Front).  Do you think I can get that trending?  If you’ve been reading my blog for the past five years, you know I am a rhubarb apologist.  It’s not too tart, it’s not too weird, and no, I don’t want to mix it with strawberries.  I love the flavor of rhubarb and every spring around this time I want to get into the kitchen with those rosy stalks.

This spring I’ve been trying to cut a lot of carbs out of my diet (more on that later, if you’re interested), and so after thinking about some new ways to use rhubarb, I hit on rhubarb cheesecake.  Pairing rhubarb with creamy custard is classic, and the almond crust plays a nice crunchy counterpoint to the creamy filling.  What I especially love about this recipe is that it’s so versatile for this time of year – the rhubarb cheesecake would be a beautiful addition to your Easter table, or, given that it’s gluten- and grain-free,  a great Passover treat.  I’ve provided both the low-sugar version (I used a sugar substitute) and the full-sugar versions below.

The cake is great on its own, but serving it with the remaining rhubarb compote really punches up the springtime flavor.  Both of my kids were fans, and repeated words that were music to this rhubarb-loving mama’s ears:  “More rhubarb, please!” 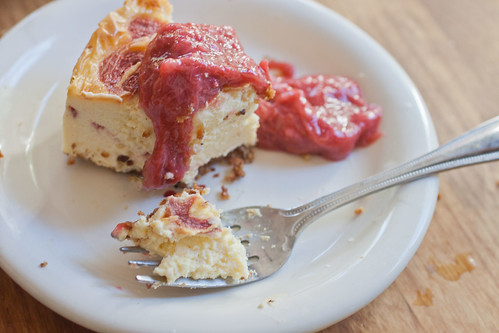 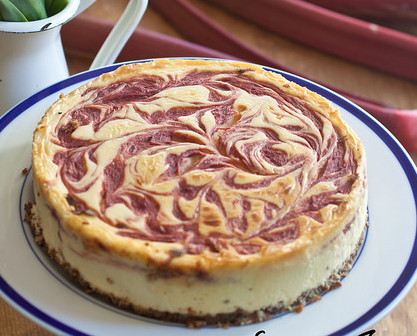 Author:
Kate Wheeler
Serves: 8
Prep time: 25 mins
Cook time: 1 hour 15 mins
Total time: 1 hour 40 mins
Print
Ingredients
For the Rhubarb Compote
For the Almond Crust
For the Cheesecake Filling:
Instructions
Make the Rhubarb Compote:
Make the Almond Crust:
Make the filling:
Notes
This makes a 7 inch cheesecake - if you want to double the proportions, it will make a slightly taller 9 inch cheescake, but cooking times may increase. I used Truvia Baking Blend as a sugar substitute, and have indicated the respective amounts. You can make the cheesecake filling with a mixer, but I found after some trial and error that a food processor yields the smoothest, most luscious results, with no lumps of cream cheese.
3.2.2802