Fresh Cranberry Pie with Marzipan and How to Make Pie Crust
Pasta with Butternut Squash, Spinach and Cashel Blue Cheese 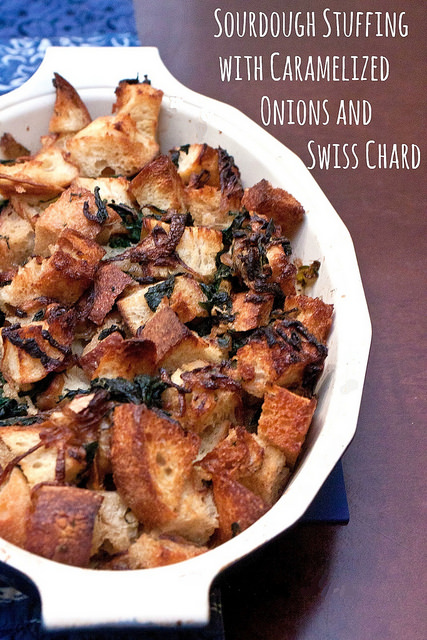 Thanksgiving is one of those holidays that can be hidebound by tradition.  Even the most adventurous eater has certain holiday rules that make Thanksgiving dinner more than just a lot of food.  For some, jellied canned cranberry sauce is required.  For others, they have to have grandma’s sweet potato casserole.   My husband has to have pumpkin pie.  My parents once shared Thanksgiving dinner with otherwise reasonable people who insisted on green bean casserole with condensed cream of mushroom soup and canned fried onions (I actually love the stuff, but it’s not part of our family’s Thanksgiving tradition.  Which mostly involves making everything from scratch.)

I consider myself pretty open minded with regards to Thanksgiving.  Obviously – turkey.  And cranberry sauce in some form.  Some vegetables are nice. Some form of pie.  I don’t even need rolls.   There is one dish, however, without which Thanksgiving is just not worth celebrating – and that’s my dad’s old-fashioned fresh sage stuffing  (Coincidentally, today is my dad’s birthday. Happy birthday, dad. I miss you).  This is not that. 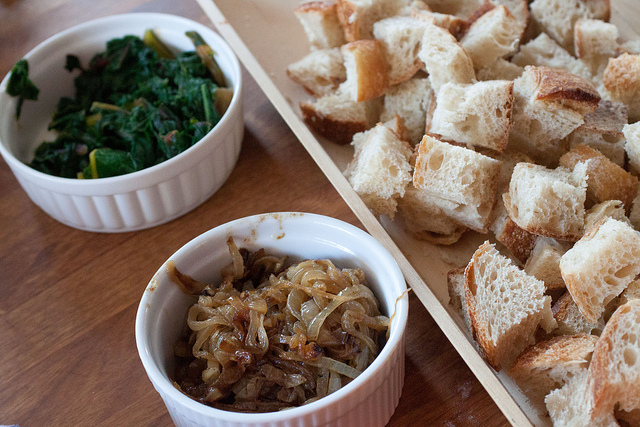 BUT, being a food blogger, which means Thanksgiving comes not once, but thrice (or more) a year,  I’ve discovered that stuffing?  Makes a pretty great side dish.  It’s a great alternative to potatoes or rice, and everyone always enjoys it.   You can mix it up in a Southern direction with cornbread and bacon, or you can making something like this, which has a decided California bent.  Inspired by a great recipe for panade in the The Zuni Cafe Cookbook

(affiliate link), this stuffing features tangy cubes of sourdough bread laced with sweet caramelized onions and ribbons of swiss chard.  I baked it in a shallow dish, so the ratio of crisp edge to moist interior is high, but a smaller, deeper dish would have the opposite effect.

If your Thanksgiving rules involve mashed rutabagas, or quivering cylinders of jelly, this would be a great addition to your Thanksgiving table.  If, like me, you are a Thanksgiving stuffing purist, this is a great side dish for roast chicken, or pork, or even a nice stew. 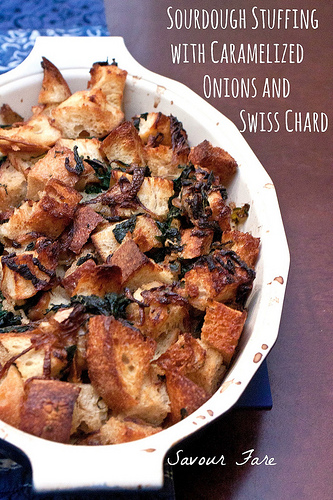