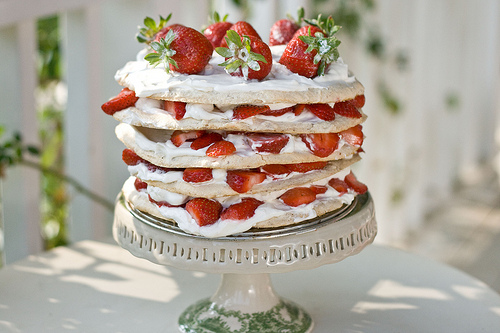 To me, there’s something a bit mystical about Midsummer’s Day, the longest one in the whole year. Perhaps it was being raised by a Shakespeare professor — I half expect to see fairies peeping through the trees in the long, slow evening, tempting me with apricocks and dewberries, purple grapes, green figs and mulberries. Perhaps it’s just that deepseated human yearning for light and sunshine.

Or maybe it’s the strawberries. In Sweden, whose northern latitude means the dark of winter is very dark indeed, they know how to celebrate the glorious (very) long days at midsummer. In the middle of June, they hold a midsummer festival, featuring flowers, feasting, and the short strawberry season. This cake is inspired by the traditional Jordgubbstårta, or Swedish Midsummer Strawberry Cake. It’s traditionally made with spongecake, strawberries and cream, but I decided to tart it up a bit by replacing the spongecake with layers of almond laced meringue, and giving them a Scandinavian flair by adding a trace of cardamom. It doesn’t require any special pans — the meringue is just dolloped onto baking sheets lined with parchment and greased. Then spread into pre-set circles and baked in a very low, slow oven for a few hours before you stack them with cream and strawberries. The result is a cross between a Swedish Midsummer Cake, a French Macaron or Dacquoise (the big sister to the macaron), an English Victoria Sponge, an American strawberry shortcake, an Australian Pavlova and my weird imagination. A very good cross. Let’s just say that four people demolished the entirety of this eight inch cake in one sitting. The edges of the meringue stay crisp, while the cream and the juicy strawberries soften the center into a creamy, light cake. It’s the very essence of summer — light and almost insubstantial, but deeply satisfying. It might even tempt the fairies out of hiding ….