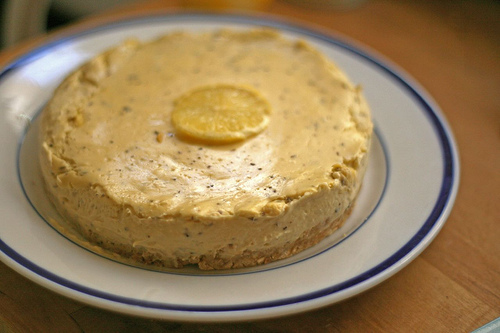 It’s the end of the month which means it’s time for the Daring Bakers’ Challenge. If you don’t know about this group of intrepid, take-no-prisoners bakers, you can find out more at their brand new website, The Daring Kitchen.

The April 2009 challenge is hosted by Jenny from Jenny Bakes. She has chosen Abbey’s Infamous Cheesecake as the challenge.

Now cheesecake and I don’t have the best history. You see, my father makes terrific cheesecake — huge, New York style cheesecake with a creamy filling and sour cream topping. He makes them every year at Christmas time for his students, and his fame as a cheesecake baker is widely acclaimed. I wouldn’t dare make traditional cheesecake for fear of being accused of trying to steal his thunder or worse, having my cheesecake come up terribly, terribly short. The one time I did try to make a cheesecake — pumpkin cheesecake, for Thanksgiving, it was roundly dismissed in favor of pumpkin pie.

So you see, I needed a little daring.

Fortunately, Jenny gave us lots of leeway with this cheesecake, allowing us to get creative with the crust, the flavoring of the cheesecake, and the topping, so I didn’t have to worry about stepping on my dad’s cheesecake toes (it also helps that he’s currently out of the country and can’t challenge my cheesecake). Always loving slightly unusual flavorings, I elected to go with an earl grey tea flavored cheesecake, and to complement the lemony flavor of the bergamot, the crust is made from animal cookies, which have a slight lemon flavor, which I boosted with lemon zest. Not sure why the buffalo crackers are facing the opposite direction from the other animals.

I also cut the recipe in half (it’s not that we can’t eat a whole cheesecake, but that we can), which was enough for a 7 inch cheesecake and two mini cheesecakes in custard cups. This was a really delicious cheesecake, and very easy to put together. I began by making the crust by making crumbs from the animal crackers (I was too lazy to drag out the food processor so I used a ziplock and a rolling pin which resulted in less than even crumbs. It didn’t matter after cooking.)

To give the filling the earl grey tea flavor, I heated the cream with two teabags and let it cool and infuse. I squeezed every last bit of tea from the teabags then opened one and added the tea leaves to the filling. Using teabags meant the leaves were small enough that they added some good tea flavor and visual interest without adversely affecting the smooth texture. The rest of the filling came together like a snap. Mix cream cheese and eggs and sugar with the cooled cream, and pour it into the pans with the crusts. I would recommend springform pans if you have them, since the cheesecakes release more easily, but if you prepare your pans with grease and parchment paper and make the cakes small enough, they’re not too tough to depan. Bake in a water bath (to avoid cracking) until the cheesecakes are still a little wobbly in the middle. The little ones were done after 30 minutes. The big one took closer to 40. Let cool thoroughly before you try to turn them out of the pan, then run a knife around the edge. Turn it out onto your hand (if you’ve got a better way I’m all ears) and quickly turn it onto a plate. This was a great cheesecake. It was easy to put together, had a smooth creamy texture, and was not too sweet. I just might have to make it again and give my dad a run for his money.