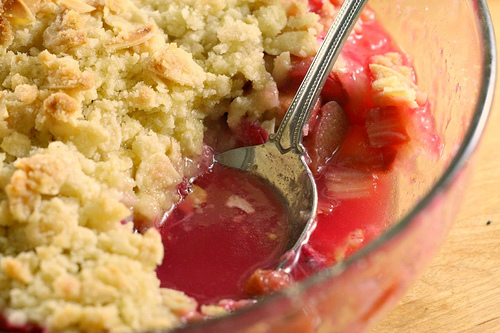 Skip straight to the recipe

Rhubarb is a prominent part of my culinary psyche, and rhubarb crumble is one of my favorite ways to use it. When I was growing up, my great grandmother had a rhubarb patch in the back of her house, and whenever I would visit we’d cut the stalks, cook them with sugar into a gloriously pink and viscous mass, and eat with a spoon. When I was in college and studying abroad in London, I discovered the unique joys of rhubarb jam, and now every time I am in England or France I pick up a few jars of the stuff, which doesn’t seem to be available in the United States.

Every spring I keep my eyes wide open for rhubarb, often heading expectantly towards the swiss chard, only to be disappointed. This spring seems to have been a later one for rhubarb than usual, but finally FINALLY I spied those long red stalks at my local market, languishing about near the Brussels sprouts, without even a sign showing their price. I didn’t care, I bought them anyway, because in my opinion, you can never have too much rhubarb. I’m always flabbergasted when I hear people say things like, “Oh rhubarb? Yeah, I don’t really know what to do with it, so I’ve never bought it” because a) the advent of rhubarb season looms so largely in my mind I can scarcely believe it goes unnoticed by anyone, and b) I can think of about sixteen thousand things to do with rhubarb.

This rhubarb crumble, though, is far and away my favorite thing to do with rhubarb. It takes about ten minutes to assemble and the results are really, really good. I am a crackerjack rhubarb crumble maker, if I do say so myself. The fruit is an eye-popping pink color, the topping is golden brown, and it’s very, very difficult to resist eating the whole thing out of the baking dish with a spoon. I make rhubarb crumble every year, without fail, when the rhubarb appears in the market. I hope this recipe encourages you to take a chance on rhubarb this holiday weekend. Because nobody should have to live without it.