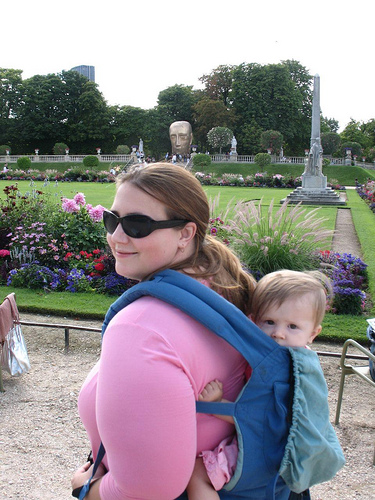 I’ve been watching bemusedly as the latest “battle” in the “mommy wars” has exploded over the internet. First, it was a controversial statement by a French sociologist that attachment parenting is anti-feminist. (For those not up on their parenting terminology, “attachment parenting” is a term coined by Dr. Sears and is characterized by parents or caregivers creating an attached relationship with their children. Some practices that are typically considered “AP” include breastfeeding, extended breastfeeding (after age 1), babywearing (carrying baby in a sling or carrier instead of a stroller), cosleeping (a family bed), feeding on demand, responding to a child’s nighttime cries instead of “crying it out”), and other practices that aren’t necessarily AP as Dr. Sears defines it but are often practiced by parents who practice other AP practices, including elimination communication (early toilet training by following a baby’s cues instead of diapering), unmedicated childbirth, vaccine avoidance or delay, cloth diapering, homeschooling, unschooling, etc.) This was picked up by the New York Times in a ludicrous “Room for Debate” feature in which various “experts” (note to the NYT – just because someone writes a blog called “PhD in Parenting” does not mean that she has, in fact, a PhD in parenting) weighed in, mostly with arguments as nuanced as “Attachment Parenting is best!” “Attachment parenting is pointless!” or my favorite “Feminism is bad!” (Thanks, NYT. I feel so educated.) Then Time Magazine joined the fray with this provocative cover and the even more provocative headline “Are you Mom Enough?”

The argument is that a) on the one hand, the principles of attachment parenting cause Mothers (and don’t get me started on where fathers are in this whole debate) to subjugate themselves to the whims of their children and lose everything in the process. Breastfeed? You can’t work. Cosleep? You’ll NEVER HAVE SEX AGAIN. Babywearing? YOU WILL NEVER BE FREE OF THE MONSTERS. On the other side, Mothers (again) should follow the principles of attachment parenting because it’s best for the delicate psyches of their children, and Mothers (again) should recognize that mothering is their most important job and putting their child’s needs comes before all else in a Mother’s world.

I am here to tell you that attachment parenting is not that far outside the norm. It does not automatically create a choice between the child’s happiness and the mother’s. I know this, because by many measures, I am an attachment parent. The dirty little secret that the media isn’t telling you is that most mothers are attachment parents to some degree or another. It’s not an all or nothing proposition. Parents adopt the parenting strategies that work for their families. And the other dirty little secret is this: nobody really cares what you do with your family. When it comes to surviving and thriving as parents, there are no “mommy wars.” We’re all just trying to get along and raise our kids the best way we can.

I, like many parents I know, came to my “attachment parenting” via pragmatic, rather than ideological means. I wasn’t following some theory of trying to raise the most well-adjusted children. I was trying to raise MY child, in a way that made sense in MY life, and in a way that made ME happy. Grocery shopping is much easier when you’re pushing a shopping cart instead of a stroller — wearing the baby is a natural extension (baby carriers are also very helpful when traveling or in any situation that will involve a lot of stairs). Breastfeeding is cheaper than formula feeding, and I hate mucking around with bottles. After all, I’m taking my breasts along with me anyway.

For me, cosleeping made sense, as an exhausted working mom. Dragging myself out of bed, or even worse, down the hall, to tend to a crying baby in the middle of the night just made no sense. And as a full time working mom, I enjoyed the night time cuddles. Far from sacrificing myself and my ability to work to the principles of attachment parenting, I chose to practice them because they worked better for me. And most of the cosleeping moms I know (and it’s more than you might think) also work outside the home in demanding professions, and cite the same reasons for cosleeping that I do.

Breastfeeding, is, oddly enough a hot button issue. I wanted to breastfeed because it does confer health benefits on the mother and child (lower susceptibility to gastric illness and ear infections for the child, weight loss, mood regulation and lower incidence of breast cancer for the mother), but also for the convenience reasons I cited above. I was able to breastfeed full time because I was able to take a decent length maternity leave, and I work at a desk job that gave me time to pump milk and also work. What I don’t usually talk about (not because it’s shameful, but because a) nobody cares and b) it’s none of their damn business anyway) is that my nursing relationship with the Nuni lasted well beyond her first birthday. We didn’t nurse all the time, but once or twice a day lasted well into toddlerhood. It was a bonding ritual, comforting for us both (and never involved her standing on a chair, per the Time cover), no skin off my back, and ended naturally when we were ready. I didn’t set out on a quest to breastfeed for an extended period of time — it just happened, and it felt normal and WORKED for our family. I don’t know what will work for Roo. We’ll just have to see when we meet him in a little over a week. And the week after that, and the week after that.

And that’s the crux of it. Parenting isn’t an all-or-nothing proposition. It’s a series of decisions, some day by day, some minute by minute, some longer term. And maybe the women I know are particularly compassionate or rational, but we get that. We’re not fighting other moms. We’re doing the best we can, questioning our own decisions, muddling through. The so called “mommy wars” are an outsider perspective. When we’re in the trenches, we’re all on the same side — trying to raise decent human beings.