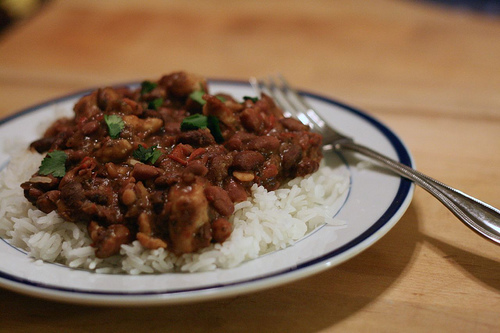 Few dishes are as strongly associated with one city as Red Beans and Rice is with New Orleans. Louis Armstrong reportedly signed all of his letters “Red Beans and Rice-ly yours” in a nod to his hometown, where red beans and rice is a traditional Monday dish. And it’s no wonder that Red Beans and Rice are a signature dish of the Big Easy — they are easy to prepare, easy to afford, and easy to eat. Just a few ingredients — beans, some vegetables, a few spices — are transformed. It may not LOOK like much, but it tastes just dandy.

The simplicity, of course, made it perfect for my week of low budget meals. Dried beans are inexpensive, the vegetables are staples, and I have a well stocked spice cabinet. This is also a dish that is regularly in rotation in my household, because it cooks best in the crockpot. And if you are a working mother (or working anything, frankly), the crockpot should be your friend.

My recipe comes from my friend Betsy, who is a real, honest to goodness, native of New Orleans. OK, the New Orleans vicinity. But she’s the real thing. She’s also sweet, funny, and a great cook, though she’d probably be the first to deny it. I made a couple of changes in this week’s rendition, but I’ll make notes on the original. New Orleans Red Beans and Rice in the Crockpot Author:
Kate Wheeler
Serves: 6
Prep time: 15 mins
Cook time: 8 hours
Total time: 8 hours 15 mins
Print
Ingredients
Instructions
Notes
FYI -- the "Holy Trinity" of New Orleans cuisine is the aromatics of onion, green bell pepper and celery. (Contrast this with the equivalent in French cooking -- mirepoix, which replaces the bell pepper with carrot. There, you've learned something). I used red because I like them better. It's blasphemy, but the truth of the matter is that I'm from California. We do blasphemy well. Ask any red state.)
3.2.1596

What I love about this recipe: Dinner’s made when I get home, it stays good if you leave it in the crockpot on “warm” (in the event that your husband walks in the door starving at 9:30 p.m.), it’s good for lunches the next day and it freezes well.