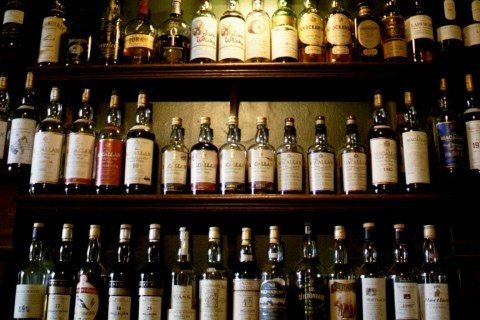 It’s that time of year. Yes, peace and love and joy and family and cookies and all that, but also the time of year when you find yourself looking for gifts for a variety of people. People like your clients, your boss, your brother in law, your boyfriend’s dad.* In times like these, the eager giver turns to Scotch Whisky (note the lack of an “e.” If you’re drinking whiskey, you’re in the wrong country). Scotch is a good gift — it’s expensive enough to convey value, but not so expensive it will bankrupt you. It’s sophisticated, a little exotic, implies that you know a lot about the finer things in life. The question becomes what scotch to buy. This guide will give you a little overview of how to choose a nice bottle of scotch if you are not a scotch connoisseur, as well as discuss it reasonably intelligently with the giftee.

*Although I know many women who drink scotch, I know of no woman who has ever received a bottle of scotch as a gift. I, for one, would much prefer to receive a nice bottle of scotch than either a scented candle or bath products.

A quick primer on how scotch whisky is made.

Scotch Whisky is made from malted, or sprouted barley, that is then dried in hot air, sometimes over peat smoke. The dried barley is then mashed, mixed with water, allowed to ferment, and then distilled, almost always twice. The resulting liquid is then aged in oak barrels for a minimum of three years. Often the barrels are recycled, and the whisky takes on some of the characteristics of whatever was aged in the barrels previously — usually bourbon or oloroso sherry. The flavor of the scotch whisky is influenced by the grain and the water, but also the amount of smoke used in drying the barley, the type of barrel the whisky is aged in, the area where the whisky barrels are stored, and how long the whisky stays in the barrel before bottling. Before bottling, the whisky from different barrels is blended to taste to produce the characteristic flavor of the distillery. Once the whisky is bottled, the flavor doesn’t change (unlike wine) and a bottle of whisky can be stored indefinitely at a reasonable temperature.

A single malt whisky is a whisky made at a specific distillery, and closely reflects the style of the distillery. The water, amount of peat, and type of barrels are all distinctive, and tend to fall into a regional style (more on that below).

Regional Variations
Scotch whisky is, by definition, produced in Scotland (although the Japanese have been working on producing a reasonable facsimile. Don’t buy someone Japanese scotch, though, unless you happen to know they have a pronounced love for Japanese scotch or the esoteric.)

There are four major whisky-producing regions of Scotland, each of which tend to produce a distinctive regional style.

Lowlands
The lowlands of Scotland are the area with the richest soil, rolling fields, and no mountains. The whiskys produced here are lighter and more floral and drier than the whiskys produced in other regions, and and they’re triple distilled, which can yield a smoother malt. They rarely use any peat, and have no accompanying smokiness. The distilleries are also inland, and don’t get some of the seaweed tang you can find in the other regions. Auchentoshan and Glenkinchie are the most commonly found lowland whiskys. They’re not a bad gift, but I’ve never met a scotch drinker for whom these were the whiskys of choice.

Speyside
Speyside is the most prolific whisky producing region. In the eastern Highlands (not far from Aberdeen and, for you Macbeth fans, Birnam Wood), this relatively small area contains over half of Scotland’s active distilleries. Namedropping is easy in Speyside; some of the most famous whiskys — the Glenlivet, Glenfiddich, the Macallan — are all produced in Speyside. Speyside whiskys are sweeter than the ones you find in the lowlands, also fruitier, with hints of vanilla, and are usually described as “elegant” and “complex”. There are two major styles within Speyside – a light, classic whisky (like the Glenlivet) and a bigger, full bodied whisky with a long sherry finish (aged in sherry barrels) which is typified by the Macallan. If you’re giving a gift and you don’t know much about either scotch whisky or the recipient, a Speyside whisky is generally a safe bet. My father, as you may have gathered, was a Macallan man. My favorite Speyside malts are the Balvenie, which is a bit smoother and spicier than the Macallan but has that sherry finish, and Mortlach, which is richly sweet and tastes of spices and dried fruit. Somewhere around we have a bottle of Mortlach carried back from our honeymoon in 2003.

Highlands and Islands
This region covers most of Scotland, and as you might expect, the whiskys can vary a great deal. They tend to be fuller bodied than the ones produced in the Lowlands, and sweeter, and fruitier. Two of my favorite whiskys are produced in the Highlands — the Dalmore (which used to be a fantastic bargain, until people discovered it), which is fruity and spicy and rich like a good fruitcake, and Glenmorangie, which is a lovely, smooth malt with a really classic flavor. Glenmorangie has also released some special bottlings in the past which are aged in barrels formerly used for port or sherry — the barrels give the whisky a characteristic flavor from its previous uses, while it very much remains Scotch. The western Highlands and islands also produce some whiskys with a little more peat smoke than you find in the east, and some brininess you get from the barrels sitting in sea air. Oban, produced in the western highlands, introduces a little peat, and Talisker, produced on the Isle of Skye, is quite full bodied and peaty. If you’re looking for a whisky with some smoke that doesn’t overwhelm, either of these are excellent choices.

Islay
Islay is a tiny island off the coast of Scotland, and the distilleries here produce big whiskys with a LOT of peat smoke flavor. Laphroaig is probably the best-known of the Islay scotches, which also include Ardbeg and Lagavulin. If you’ve never tasted one of these, they taste like drinking a campfire. People who love Islay whiskys REALLY love them, but unless you know the recipient is a lover of the Islay style and intense smoke, I wouldn’t give them as a gift. They’re too distinctive and can be overwhelming. (Which is not to say I don’t like them. They can also be a lovely sip on a cold winter’s night. They’re just not a safe bet.)

Aging
By law, scotch whisky has to spend a minimum of three years in barrels before it’s called scotch. You’ll most likely find whiskys in the 10-12 year range. A 10 or 12 year old whisky is standard. An older one, 18 or 25 year, is going to be stronger (due to evaporation from the barrels – called the “Angel’s Share”), and more strongly flavored. It’s also going to be more expensive. It’s not necessary to get an older scotch – a 12 year old is more than respectable.

Special Bottlings
Many distillers are producing special bottlings. Cask strength is common — this is very strong whisky that hasn’t been diluted with water (most whisky has water added to it after aging in the barrels to bring it to about 80 proof – cask strength tends to be closer to 120 proof). There are also special bottlings that are specially aged in a port or sherry cask, or from a single barrel, instead of blended from several barrels, or specially blended for an event. These can be nice for the serious collector (and some of the special woods are even nice for everyday) but again, not essential for gift giving.

Serving Whisky
Scotch whisky is served in a serving called a “dram” which is roughly equivalent to a shot but with a more evocative name. Scotch should be chilled — I know that Whisky stones are getting very popular because they chill the drink without diluting it, but the full flavor of Scotch whisky is enhanced with some water. In Scotland, scotch is always served neat with a bucket of ice and a pitcher of cooled water, so the drinker can mix to his or her satisfaction. My preferred way to drink a really good scotch is with a single ice cube in it, so you can taste the flavors opening up as the ice slowly melts.