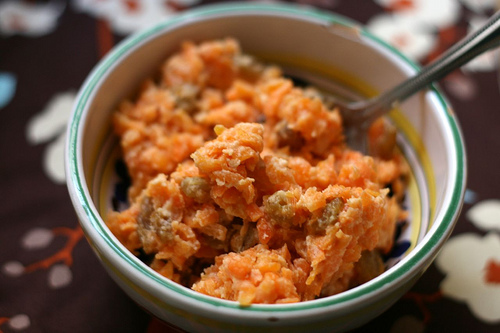 When I was pregnant with the Nuni, I ate prodigiously of a wide variety of foods. I have read that the mother’s diet can be “tasted” by the baby, and babies develop a preference for the familiar (supposedly to protect their delicate systems from the danger of eating an unrecognized foodstuff. Of course, anyone who has ever had a baby knows this is a load of hooey, because there is nothing that babies like to eat more than something that is clearly not food, be it crayons, paper, or random bits of crap they find on the floor.) I figured that the Nuni would develop an early love for Indian food, for Brussels sprouts, for roasted peppers, and that MY daughter would not, in fact, be a picky eater.

Apparently, this strategy tanked. My skinny toddler failed to get the memo regarding the Brussels sprouts (though apparently the mint chip ice cream stayed with her) because what she really likes to eat is sweets. (Yes, she will in fact, taste the Indian food, or even the roasted peppers, but the thing she is most likely to attack with gusto is dessert in its many forms.)

I am left with the classic mother’s dilemma – how do I get my kid to eat (ideally some vegetables, and maybe some milk) without loading her up with sugar? I have two words: Carrot pudding. The first time I made this I had some leftover shredded carrots and I remembered a beautiful dish I had seen on some blog somewhere – I can’t remember where – so thank you, unnamed internet inspiration. I am lucky to have a mind that rapaciously devours trivia, which gave me enough information to look up this pudding – it’s Indian in origins, carrot halwa, and there are recipes all over the internet. The recipe I used I adapted from Madhur Jaffrey’s Invitation to Indian Cooking.

The main ingredients are carrots and milk – think of this as rice pudding, with carrots acting as the starch instead of rice. You cook the carrots in the milk until most of the liquid has boiled away, then you add butter (really ghee, but I don’t keep it in the house) and just a little bit of sugar and some raisins, if you want to. Madhur Jaffrey flavors hers with cardamom pods, so I did too, because I like them and also because I had them. Vanilla would also be a nice flavoring, or some lemon zest, or even a little cinnamon. The best part is that the Nuni will eat this, it only has two tablespoons of sugar in the whole recipe (though you could try leaving it out if your child is less strong-willed than mine, or replace it with maple syrup if you have a thing about refined sugar), and I can secretly cackle in glee knowing that my child is happily gorging herself on vegetables.