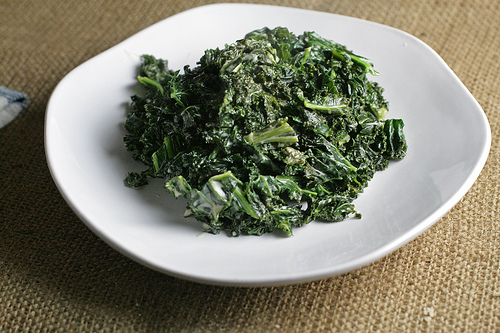 Something funny has been happening this winter — kale has become a staple in my refrigerator. A week rarely passes when I don’t buy a bunch, either from the farmer’s market or during a Whole Foods run. It’s a combination of being drawn to the purported health benefits of kale, admiring its ruffled appearance and just plain liking the taste. Kale has a savory heartiness that doesn’t contain the metallic tones of spinach or the sometimes bitter flavors of collards or mustard greens. Author:
Kate Wheeler
Serves: 4
Prep time: 5 mins
Cook time: 15 mins
Total time: 20 mins
Print
Ingredients
Instructions
Notes
Adapted from Saveur
3.2.1336
Sometimes I make kale chips or crispy kale (google and you’ll find a kajillion recipes — one of these days I might even get around to posting my recipe, but it usually gets eaten too fast to take pictures), but more often, especially when my kale buying enthusiasm and my cooking time do not overlap, I end up making this creamed kale. It can be made with wilted greens, which is a plus in the flexibility department, and is easy and delicious to boot. In fact, if you’ve been paying attention round these parts, you may have noticed creamed kale keeping company with Lamb Top Round and Pommes Anna on New Year’s Eve, or setting off this chicken sausage casserole. It’s a versatile and hearty dish, and one that has become a regular in my kitchen.