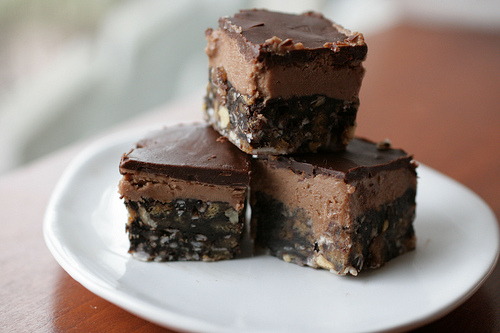 It’s time for the Daring Bakers again, and while this month’s challenge presented its own obstacles, It had the advantage over last month’s challenge for me by 1) Taking only a reasonable amount of time, 2) Not leaving my entire house covered in royal icing and 3) resulting in something that I would actually like to eat. Wait, maybe that last one isn’t such a good thing. My thighs aren’t thanking me for these suckers. (Fortunately, my husband’s colleagues are — thank goodness for willing recipients of sugary treats).

The January 2010 Daring Bakers’ challenge was hosted by Lauren of Celiac Teen. Lauren chose Gluten-Free Graham Wafers and Nanaimo Bars as the challenge for the month. The sources she based her recipe on are 101 Cookbooks and www.nanaimo.ca.

If you’ve never heard of Nanaimo bars, they’re as fun to eat as they are to say (they’re pronounced nuh NIE mo). A local specialty invented in Nanaimo, British Columbia (Lauren chose them in honor of the Winter Olympics in Vancouver), they are relatively easy to assemble (if you don’t make your own graham crackers). The bottom is a rich crumb crust flavored with cocoa, coconut and nuts, topped with a sweet icing layer and finally a chocolate ganache. To spice things up, and because I had some hazelnuts I wanted to use, I elected to make chocolate hazelnut nanaimo bars, using toasted hazelnuts in the bottom layer and making a nutella flavored icing for the middle layer. They were incredibly rich, incredibly sweet, and a little addictive.

Lauren recommended using a blend of Tapioca, Sorghum and sweet rice flours to replace the wheat flour in the recipes. I had trouble finding all of these and lacked both the time and the funds to invest in hunting down and purchasing several different gluten free flours, so I used Bob’s Red Mill Gluten Free Baking mix in my gluten free graham crackers. And it was sticky. Really sticky. God bless the gluten free bakers for their heroic work, because I couldn’t work with the dough at all. (It doesn’t help that I already have a pathological aversion to rolling things out, I suppose).

Here’s the GF dough right out of the food processor: And here’s the wheat dough, which was also sticky, but more manageable, as you can probably see from the photo: After I had chilled both doughs, I rolled them out. Or I should say “attempted to roll them out.” Even after sandwiching the chilled gf dough between two pieces of parchment paper, it was more like batter than dough, and when I peeled off the top piece of parchment, at least half the dough came with it. Undeterred, I just threw the whole bottom half in the oven, parchment and all, and baked it for about 20 minutes.

The wheat dough I was actually able to cut into squares (although I then didn’t separate the squares and all my hard work disappeared upon baking. These were fairly easy to cut warm into neat squares.) The finished crackers were both delicious, and while the wheat ones were prettier, the gluten free ones had an interesting and pleasant flavor that I just couldn’t quite put my finger on. I ended up using the wheat ones in the nanaimo bars (there were more of them, due to less rolling loss) but both crackers disappeared pretty quickly in my household (as in, within two hours). Neither cracker was as crisp as commercial graham crackers. After the graham crackers, the Nanaimo bars were a snap to put together. I blitzed some of the graham crackers in the food processor to make crumbs, and used chopped toasted hazelnuts, Callebaut dutch cocoa, and unsweetened coconut flakes (there was plenty of sweetness in these, so I tried to cut it wherever possible. I also used Scharffenberger bittersweet chocolate for the top layer.)

Because I love Nutella, I opted to make a nutella icing for the middle layer. This is easy, but incredibly sweet, with the rich flavor of Nutella. I try to buy imported Nutella whenever possible because most Nutella distributed outside the US is not made with hydrogenated oil, so we can pretend it’s health food. I think it also tastes better — much closer to the Nutella I first tasted in Italy, where it is ubiquitous. Luckily, my local market carries imported Nutella — I’ve bought Polish nutella there before, but this jar happened to be Canadian, which was nice, given the nature of the challenge.

I found it was easiest to cut them if I didn’t chill the bottom layer too long before adding the frosting. I added the top layer as soon as the frosting was set. I also let them sit at room temperature for a few minutes before cutting them.

I’ve wanted to make Nanaimo bars for a long time. I first encountered Nanaimo Bars in the brilliant Christopher Guest movie “A Mighty Wind”, in which former 60’s folk singer Mickey (played by Catherine O’Hara) discovers that her singing partner, Mitch has disappeared right before a reunion concert. The concert organizer asks if she would consider performing both parts in their duets, and she says “No, I’d consider going home, making a nice tray of nanaimo bars, lying in bed and watching TV – that’s what I like doing.”

Well, having now made nanaimo bars, I can say that yes, that’s what I like doing too.