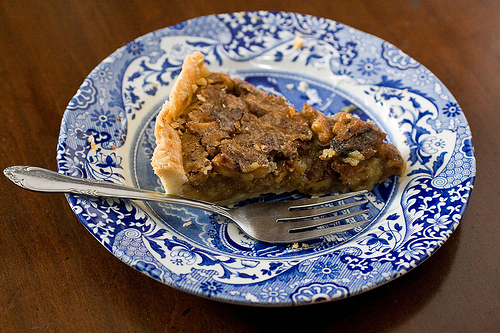 Fall themed desserts are all over these days – pumpkin bread puddings, cranberry panna cotta, pecan trifle. And those of us with a confirmed fear of rolling pins grasp at these desperately. But now it’s time to get real. You and I both know that Thanksgiving is about pie. Preferably multiple types of pie. The table should be GROANING with pie. Pumpkin pie, mincemeat pie, apple pie … Panna cotta, while a very lovely dessert, just doesn’t cut it. Which means, fair readers, that if I’m going to do Thanksgiving right by you, I need to get over my fear of rolling. I need to summon the reserves — the wisdom of the elders, nerves of steel, hands of ice, and my own experience of parenting a three year old, and tell that pie dough, “You are NOT the boss of me. I am the boss. And don’t you forget it.” And then I’m going to fill it with something wonderful — in this case, a variation on the Thanksgiving classic pecan pie made with walnuts and maple syrup and no corn syrup in sight. And then I’m going to tell you all about it. Let’s start with the crust, shall we? I am tired of feeling anxiety about pie crust. I just want to make it and be done. Which means, for me, ignoring the tips and tweaks, and going back to basics. Armed with Michael Ruhlman’s ratio for 3-2-1 pie dough, Julia Child’s food processor method, Amanda Hesser and Dorie Greenspan’s plastic wrap rolling technique (though Amanda might never forgive me for calling her an elder — sorry Amanda!), I made pie crust. And it took about 3 minutes. Freeze a stick of butter, cut it into cubes (I cut it into about 24 cubes (you can reverse these steps), then pulse it in the food processor with flour and some salt until it’s coarse and uneven (about 9 pulses should do it). Add water in one fell swoop, pulse a couple of times more, then dump it all out onto some plastic wrap, pull the wrap around it until it looks like a disc of dough rather than a pile of crumbs, and chill for about 30 minutes. Then roll it out between two sheets of parchment (Amanda and Dorie use plastic wrap, but mine wrinkles like crazy) using your favorite rolling pin (and I will add that the acquisition of a French Rolling Pin

has improved my rolling technique immensely). Peel off one piece of parchment, arrange the dough dough side down over the pie dish, peel off the other piece of parchment, press it in, trim the edges, and use the trimmings to replace any holes or divots. Voila. No gimmicks. It might not be perfect, but a) it will taste good (thank you butter, not Crisco), b) it will be tender and flaky and c) it won’t give you a panic attack. Now the filling. I love a traditional pecan pie, but it is so sweet my teeth ache just thinking about it. I also don’t love all the corn syrup because it’s messy and has a funky flavor and questionable health effects (though frankly, pie isn’t health food.) When I saw the French Canadian maple sugar pie recipe in Richard Sax’s Classic Home Desserts

(which is my desert island dessert book (dessert island?) and should be in your library), my interest was piqued. Instead of pecans, it features walnuts, which give it a lovely bitter edge, and instead of corn syrup, the pie gets texture (and a lot of flavor) from maple syrup (use Grade B, which is not only cheaper but more flavorful.) It has a few other additions which cut the sweetness — apple cider vinegar, which adds an acid bite to counter the sweetness, and brewed tea (I used PG Tips), which adds some more bitterness and also flavor. The combination is a little more layered than the traditional pecan, which is just SWEET and nuts. (Not that I don’t love both sweet and nuts.) Plus, my family is French Canadian, so I was just tickled to have a “heritage” pie in my repertoire. Now for the other six varieties …