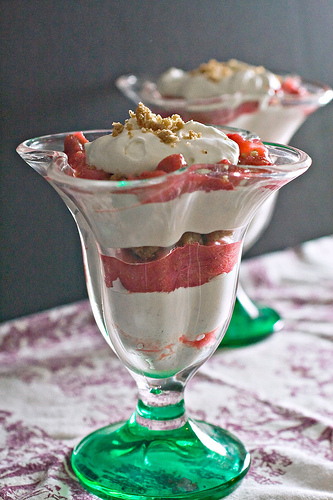 We are in full on girly mode in the The Domestic Front household. The Nuni is two and a half years old, and is seriously interested in the following (in no particular order): twirly dresses, crowns, glass slippers, toenail polish, my makeup, shiny shoes, and anything with sparkles. I would freak out in a feminist quandary, except I have a fuzzy memory of being VERY into princesses and makeup when I was quite young myself, and I am a perfectly acceptable adult with a career and a family and a tendency to wear Old Navy tee shirts to work.

In the Nuni’s world, her current favorite book is one called “Fancy Nancy”, about a hapless girl who LOVES being fancy — she likes to write her name with a plume (which is a fancy word for feather), her favorite color is fuchsia (which is a fancy word for purple), and she can’t WAIT to learn French, because EVERYTHING sounds fancy in French. Poor Fancy Nancy is beset by a thoroughly plain family, who thrills her one night by dressing up in accessories, going to a restaurant and ordering parfaits, which are “French for ice cream sundaes”.

Now, accuracy aside, parfaits are a very fancy dessert, and as the parent of a wee one who loves all things fancy, I thought I would accommodate her wishes and make them. As she also loves all things pink (as she regularly tells me, “Pink is my favrit color, mamma.”) I thought I would turn to the pinkest of all pink things — rhubarb. Sure, it doesn’t sport the aggressive magenta of anything made with beets, but for rosy, fancy, girly pinkness, rhubarb is your ingredient of choice. These rhubarb parfaits are dessert frippery — they are a confection of lightness and ruffles, inspired both by the most frivolous of desserts, aptly named a fool, and the rather flighty crumble. Smooth and tangy rhubarb is layered with whipped cream and a crumbled almond cookie. The result is very fancy indeed, and very pink indeed. And the Nuni was justly appreciative, exclaiming “I LOVE this, mamma! Dat is a BOOTIFUL dessert!”

Author:
Kate Wheeler
Serves: 4
Prep time: 15 mins
Cook time: 40 mins
Total time: 55 mins
Print
Ingredients
For the rhubarb and the cream:
For the "crumble":
Instructions
Notes
Inspired by "Fancy Nancy" by Jane O'Connor and Robin Preiss Glasser (to be fair, we also watch a fair amount of "Shrek", and who can fail to be inspired by the donkey's quote, "Parfait's gotta be the tastiest thing on the whole damn planet.")
3.2.1336