Squash Stuffed with Delicious Things
The Year of Living Vegetally 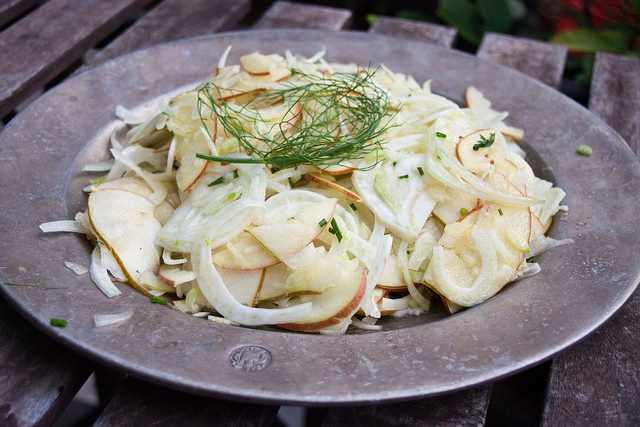 I know when I promised vegetable recipes, you were not thinking “salad.” Salad is boring. Salad is easy. We’ve already thought of salad. Well, salad IS easy, but it doesn’t have to be boring. The universe of salads is huge, and if recipes for salads are more ideas than recipes, well, couldn’t we all use some more ideas?

After the rush and gluttony of the holidays, it’s nice to find something simple to eat – simple and refreshing and light.  This is subtly sweet, with a light fennel flavor.  Nothing, as my grandmother would say, that is “too muchy, too muchy.”

We eat salads a lot. This one takes a little more hand work than the most rushed “open a bag of lettuce, throw on some dressing” (though those feature heavily in our rotation as well), but it’s also delicate, and appealing. The Nuni loved it, the husband loved it. It’s neither all sweet nor all savory, but a lovely both/and.

(An aside: I got the both/and from a sermon at church on Christmas Day, and I instantly loved it. It symbolized both abundance and nuance. Life is not black or white. It is both/and. Most issues are both/and. It’s a useful perspective.)

You can make this with a knife, but a better choice would be a mandoline. It makes quick work and beautifully thin slices. I’ve posted about mine before, but for reference, I own (and revere) the Benriner Japanese Mandoline Slicer