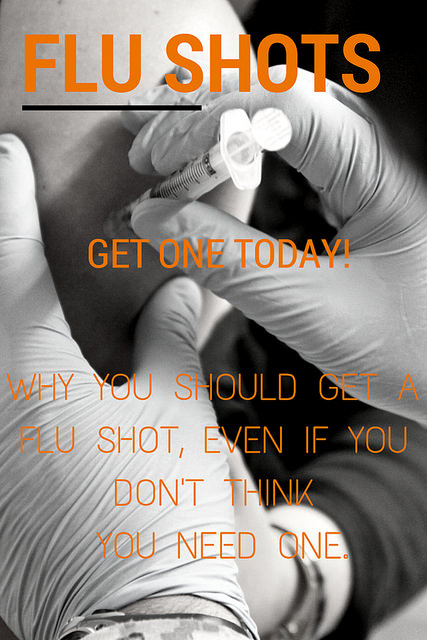 It’s that time of the year!  The time when we collectively go indoors and proceed to spend the next six months infecting each other with any number of upper respiratory illnesses.  You can stop (part of) the cycle!  Go get your flu shot!

Vaccines are in the news a lot lately  – measles and whooping cough are on the rise because of unvaccinated children.  I’m not going to go into childhood vaccinations (but really, vaccinate your kids!) but even reasonable adult people, who would never think TWICE about fully vaccinating their kids, don’t get a flu shot.  Why is that?

It takes five minutes.  It doesn’t hurt much at all – less than stubbing your toe.  It can protect you AND people you love from a terrible illness.  Sure, you have to repeat it every year, but why not?  It’s probably covered by your insurance, and many local grocery stores with pharmacies and pharmacy chains will give you a discount on your purchases if you get your flu shot there.  Get protected from the flu AND save 10% on your groceries!   There’s literally NO downside.

I see reasonable people throw out all sorts of reasons why they aren’t getting a flu shot.  None of these are good reasons.  Let’s look at them, shall we?

I don’t need a flu shot; I never get the flu!

You never get polio, either, and I bet you’re vaccinated against that.  Besides, there’s a first time for everything.

This is scientifically impossible.   Flu shots are manufactured from a deactivated virus.  You CANNOT get the flu from them.  (You can potentially get the flu from the nasal spray, but the potential is very, very slight because the virus is extremely weak).  What may have happened is that a) you were already exposed to the flu because you waited too long to get the shot and it takes two weeks to take effect or b) you caught a cold because (as I said above) it’s upper respiratory illness season.  A cold is not the flu.

I don’t get a flu shot because they don’t work!

Look, the flu shot isn’t perfect. The manufacturers make a calculated prediction of which strains of flu will be most prevalent in the upcoming winter. And sometimes they’re wrong. And even when they’re right, the efficacy is still 70%-90% in clinical trials. However, do you know what works less well than getting a flu shot? NOT getting a flu shot. Not getting a flu shot has 0% efficacy in preventing the flu. Also, there’s this thing called herd immunity. The more people who get a vaccine, the more effective it is in preventing the disease in a population, because fewer people are exposed to sick people. Let’s aim for that, shall we?

I don’t get a flu shot because the flu is not that serious.

You’re thinking of a cold. A cold is not that serious. The flu (not the stomach flu, which is something else) will land you in bed for a week, even if you’re young and healthy. And there’s the potential for serious complications, such as pneumonia, which land 200,000 Americans in the hospital each year and kill 36,000 people (according to the CDC). Plus, even if you are young and healthy, chances are that you meet people who are not. The flu is especially dangerous for young children and the elderly. Don’t you think it’s worth a stick in the arm to not kill children and grandmas? Yes, yes it is.

There’s more mercury in a can of tuna than in the flu shot, which is extensively tested for safety (as are all vaccines.) The chances of a reaction beyond a sore arm are extremely rare – FAR more rare than the chances of getting the flu and having serious complications. Driving to the supermarket carries with it far more risk than getting a flu shot. If you’re seriously concerned about mercury, they do make shots without it for pregnant women and children.

I don’t get a flu shot because it hurts too much.

Put on your big girl panties and deal with it. My seven year old is terrified of needles. It took three medical personnel to hold her down to administer her Kindergarten shots. But she now realizes that she should just suck it up. I’m sure you have as much maturity as a seven year old. Also, I already got my flu shot this year and I swear there was no sore arm for more than about 15 minutes. It’s light this year. I worked out the next day and didn’t feel a thing.

In short, get your flu shot. 15 minutes of a sore arm could save lives, including your own. At a minimum, figure you’re doing it for the good of society, and pat yourself on the back. It’s your good deed for the day! There’s literally NO downside.