Toad in the Hole
Panforte Margherita 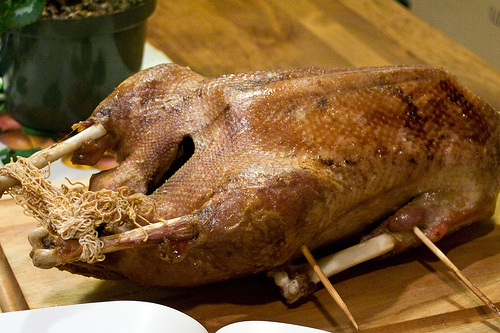 Happy New Year! How did you spend the holiday? I’ve been laying a bit low — a pregnancy complication (now hopefully resolved) kept me off my feet (and out of the kitchen) the week before Christmas, and then sciatica (extremely painful lower back and hip pain, unfortunately not uncommon in pregnancy) hit right before New Year’s.

By the time New Year’s Eve rolled around, I was ready to get back into the kitchen.

We’ve given up on going out New Year’s Eve — spending a fortune so that we can fight traffic (remember, we live in Pasadena, which tends to be a zoo on New Year’s Eve), stay up late and drink inferior champagne with strangers sounds like less and less fun as the years pass. Instead, we cook a celebratory meal and eat it at home. With good champagne (this year replaced by Q ginger ale, which was quite good, but not, alas, champagne) and family.

And this year, I decided to roast a goose. I had never had goose before, and most of the people I surveyed hadn’t either. But I was curious, and I love duck, which I figured was similar, so I thought I’d spend the exorbitant money for a special New Year’s Eve dinner. I used a Julia Child recipe similar to this one

It turned out pretty well. Goose turned out to be a lot like duck, but with darker meat, a stronger flavor, and more fat. The skin is crisp, the meat was flavorful and tender. We all enjoyed it (even the Nuni) but because it’s so rich, we ate small portions. We ate our fill, and there was enough goose for probably 3 more adults. (My mother is turning it into cassoulet).

I decided to cook it using Julia Child’s method, which was really a steam, followed by a braise, followed by a brief roast. The result was that most of the fat was rendered out (and eagerly collected by me.) Some is safely in my refrigerator, but some was siphoned off to make the most glorious roasted potatoes imaginable. The goose was good, but the potatoes were UNBELIEVABLE. It’s worth roasting a goose just to get the fat to roast potatoes in. We set the table with our wedding china, and dressed for the occasion.

Agnes of Dog must have some retriever in her, because the scent of roasting water fowl made her want to join the party more than usual. We ate shrimp and celery remoulade (my dad’s special recipe — we all miss him especially right now), goose, potatoes and salad, and chocolate mousse for dessert. We toasted East Coast New Year’s, and then it was off to bed.

East Coast New Year’s is a perk of living in California.

The next morning we weren’t overtired, or hung over (I suppose I can attribute that to the ginger ale). We woke up to a glorious day (Pasadena always puts on a show for the Rose Parade. Makes the tourists want to move here), went to church, and then ate a lucky New Year’s Day brunch out on the patio. (It was 75 degrees and sunny). Greens (symbolizing prosperity – that’s Tuscan kale, sauteed in olive oil and garlic), poached eggs on toast, Irish Bacon (pork is lucky because pigs move forward), and tiny yellow tomatoes that looked like gold coins or sunshine. (Nothing says yellow tomatoes are lucky, but look at them — how could they not be?)
We spent the rest of the day being low key, and doing things we hope to do in the coming year — read, spend family time – we even had a date night.

I hope 2012 brings you and yours luck, prosperity and happiness. Happy New Year.