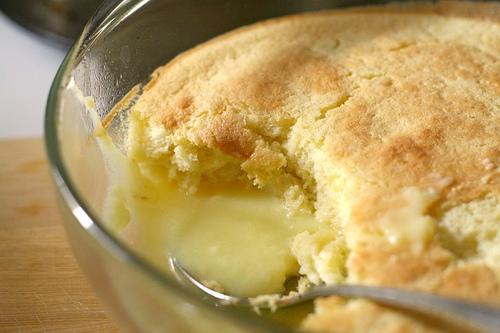 Apologies for the silly title. I’m a little punchy. It’s been one of those weeks at work, where I’m constantly teetering on the brink of bursting into manic laughter, at which point they would have to tie me up and drag me off to St. Mungo’s. Yes, one of THOSE weeks. Add to that that I haven’t been feeling well, and, well, that’s the explanation for why posting around here has been on the light side. Fortunately, I have some lovely comfort food to deliver to you, in case you, too, are having one of those weeks.

When you are sick with a cold, the best thing to have is a hot toddy. If you’ve never had this miraculous concoction, it’s a shot of scotch whisky, a few tablespoons of honey, the juice of a lemon, and a cup full of boiling water. The honey, whisky and lemon all have antibacterial properties and they soothe your scratchy throat and calm your cough. Plus if you drink enough of them, you won’t even realize you feel bad. See? Magic.

I saw this recipe for hot toddy pudding cake in Gourmet, and I knew I had to try it. It combines the comforting flavors of a hot toddy with a different kind of magic – the surprise pudding. You pour batter into a pan, and in the oven it separates into a layer of sponge cake and a layer of custard. I had tried this before once with boiling water and chocolate to really disastrous results, but this particular pudding comes together like a dream. It’s the work of minutes to mix up – Just mix, honey, lemon and whisky with a few cake ingredients, beat egg whites and sugar separately into stiff peaks, fold it together, and pop the homogeneous mass in the oven. The oven does all the work, and you pull out a lovely, pale puffy cake. But it’s when you dig into the cake that you find the lemony custard underneath. It tastes like a hot toddy – comforting and floral from the honey and the whisky. This should cure what ails you.