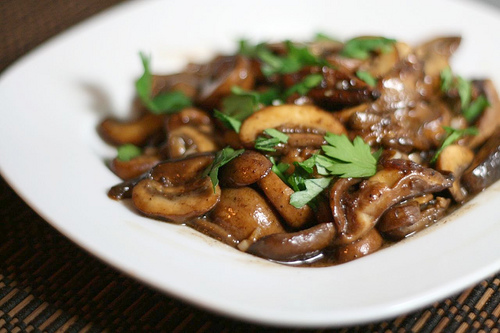 When I was a little girl, like most children, I had a whole laundry list of things I would not eat. Mustard. Onions. Cucumbers. Bell Peppers. But the things that disgusted me most, that bore the fullest brunt of my childhood disdain, that I would not touch with a ten foot fork, were mushrooms.

What the heck was I thinking?

OK, I know what I was thinking – mushrooms aren’t even in the same kingdom as other food, being neither animal nor vegetable, and the fungal kingdom needs a serious rebranding, because fungi? Just don’t sound appetizing. Also, I’m just old enough that most of the mushrooms available were those flavorless white button mushrooms.

All I can say is thank goodness for the 90’s and the Portobello mushroom explosion, because without that I might never have tried a mushroom and discovered their greatness. Because mushrooms? Are delicious. Sure, the texture’s a little funky, a little … fungal, but you get used to that, and even grow to love it because the flavor is just so flavorful and savoury. Mushrooms are what food is supposed to taste like, and if you want good mushroom, this is the way to prepare them. I often make these with steak, and start them in the same pan after I’ve cooked the beef, but if you’re not doing that, start with a couple tablespoons of butter in a hot pan, and throw in your sliced mushrooms. I use cremini (baby portobellos) as a base, because they’re cheap and delicious, but I try to add another variety of mushroom as well – sometime shiitake, sometimes oyster mushrooms, sometimes (when I am feeling rich) chanterelles or porcini. I slice up all the mushrooms and toss them in the melted butter, making sure that all of the mushrooms are coated in butter. Then you add a couple more tablespoons of butter (half a stick for about 8 ounces of mushrooms is pretty decadent.) Add a clove or two of minced garlic, and sauté until the mushrooms are starting to brown. Then you add about 3 Tablespoons of marsala, and let it bubble away in the butter and mushroom goo until the mushrooms are thoroughly brown and soft.

Top them with a little chopped parsley, and serve.

Every time I make these, Ken falls a little more in love with me. In other words, he’s a big fan. And even the Nuni likes them, which fills me with relief that she will not have to endure the deprivations of a mushroom-free childhood.