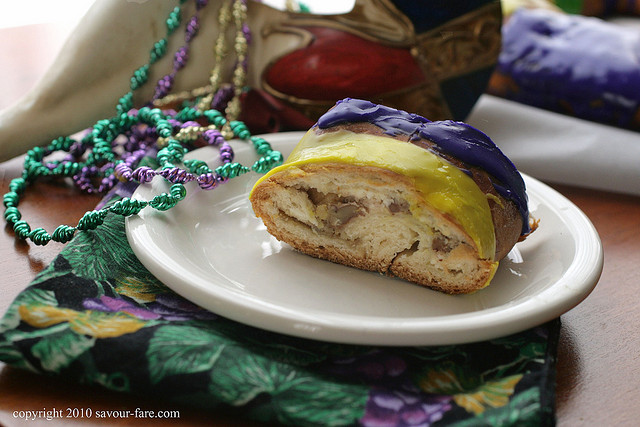 A confession: I’ve never been to Mardi Gras. I realize it counts as one of those things you should do in your life but I’m kind of afraid that that ship has sailed. Although I’ve never been a wild partier, there was a time when a citywide party with a crowd of strangers and copious alcohol may have seemed like it might be fun. Now, in my advancing middle age (I’ll be Thirty TWO on my next birthday) I am now firmly in the stage of my life where a good time means a comfortable seat, a scintillating conversation, and one or three cocktails prepared with extreme care. And I have a secret suspicion that those three items might be hard to find in New Orleans during Mardi Gras.

There are certain things I AM sorry to miss out on, though, and one of those is the famous King Cake. I’ve had the French Galette des Rois for Twelfth Night (you may have noticed if you’re a regular reader that my upbringing tends towards the francophone), but that frangipane and pastry confection is, from what I understand, NOT the same thing. I have friends in the South who talk about King Cakes from January 6 through Mardi Gras, and my interest was piqued. I’ve spent the past few years checking out all the places in Los Angeles that I thought might reasonably sell King Cake, all to no avail. So, since Tuesday is Mardi Gras (french for Fat Tuesday, fittingly) I did what any moderately insane curious person with a kitchen would do — decided to make my own. 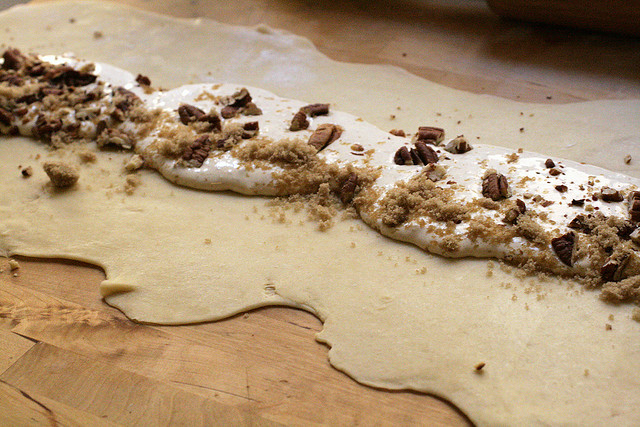 Aiming for an authentic experience, I found a King Cake recipe on the New Orleans Times Picayune website, Nola.com, and then adapted it slightly. Plain cinnamon sugar is the traditional filling, but both cream cheese and praline seem to be mentioned often enough as people’s favorites that I thought I’d go a little wild with the filling. And of course, it’s not a New Orleans Mardi Gras King Cake unless it’s decorated with the traditional colors of Mardi Gras — purple, green and gold — so I got out my gel food coloring and my icing (though food coloring never tastes good, and if you’re not being a purist I would suggest going with all white icing).

The yeast is intimidating but not difficult — remember that a moister, stickier dough will yield a lighter and more tender bread, and yeast cookery involves a few extra steps but no real extra degrees of diffuculty. And it’s worth it. The result is a buttery, rich coffee cake that is not too sweet, despite all that icing. Will it transport you to New Orleans during Mardi Gras? That I can’t tell you. But it’s certainly a cake for a king. Or a party. 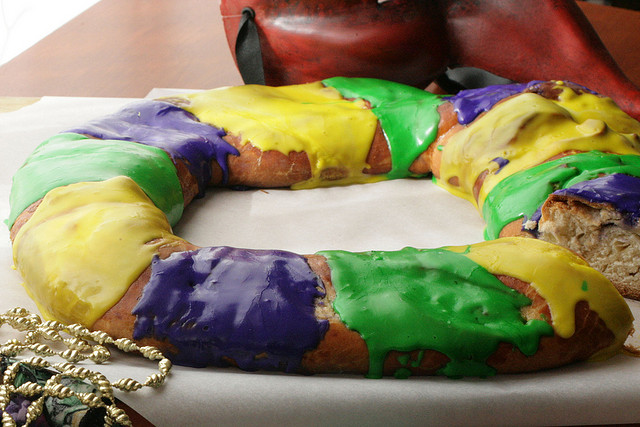 Author:
Kate Wheeler
Serves: 10
Prep time: 1 hour
Cook time: 35 mins
Total time: 1 hour 35 mins
Print
This recipe makes enough dough for two king cakes. If you're not up for two of them, the other half would make great cinnamon rolls. The Times Picayune also promises that the dough freezes beautifully. I recommend using a stand mixer because to get really tender sweet dough you're going to have a super sticky dough which is hard to knead by hand. More moisture in the dough will yield a softer, more tender result.
Ingredients
For the dough:
For the filling:
For Icing
Instructions
Make the Dough:
Meanwhile prepare the filling.
To assemble the cake:
Ice the Cake
Notes
Adapted from Nola.com
3.2.1336