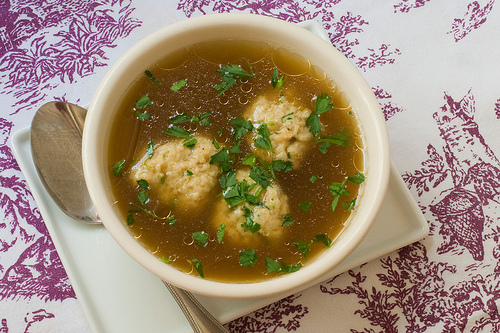 Today I have a guest post from Emily, a dear friend and a fantastic cook. I wanted to do a recipe for Passover this year, and since I did not grow up in the Jewish culinary tradition, I asked Emily to write a guest post about Passover cooking with one of her favorite recipes, which I can personally vouch for as delicious. You can read more of Emily’s writing, about food, about motherhood, and about style at her blog, West of the Loop.

For Jewish families, the two most important holidays, both from a religious and a culinary perspective, are the High Holidays and Passover. Kids prefer Hanukkah naturally and certainly latkes are one of the better known Jewish foods. But Hanukkah is ultimately a minor holiday. The two times of year that Jewish families are likely to come together — maybe even traveling to do so — are the fall High Holy Days and Passover. Passover is a holiday celebrated almost entirely at home, as opposed to in the synagogue, making it really THE holiday for most Jewish families. Even the most assimilated families will usually host or attend a Passover Seder. It’s one of those traditions that people seem to hold onto, despite inter-marriage, cross-country moves, divorce or what have you.

Any recipe for matzo ball soup, in my opinion, has to start with the soup. If you are ever going to make your own chicken broth, this is the time to do it. There are two reasons to make homemade broth for matzo ball soup. The first reason is plain: this is a dish in which you really taste the broth. Canned chicken broth is fine when making, say, squash soup, when the flavor of the squash is predominant. But with matzo ball soup, the broth is half the experience. The second reason to make homemade chicken broth is less obvious, but very important: you can use the chicken fat (schmaltz) that is rendered in making the broth to flavor your matzo balls. Matzo balls flavored with schmaltz are the real deal, my friends. The only caveat is, you have to make the broth at least a day ahead of time. It’s hard to write a recipe for homemade chicken broth. It’s more of a method than a recipe, and every cook has his or her own. But here is my fairly basic method. First, you need some chicken parts. You can use chicken bones, cooked or uncooked, chicken backs and necks, which you can buy cheaply at the grocery store, or chicken giblets (other than the liver, which will make your stock bitter), or some combination thereof. Use 1 to 2 pounds of chicken parts per 12 cups of water. You also need aromatic vegetables, such as onions, carrots, parsnips, leeks, fennel and celery. Making chicken broth is a great way to use up any over-the-hill veggies languishing in your crisper or to use parts of the vegetables that you usually trim away, such as the top of a celery stalk or the green part of a leek. Your veggies added together should equal around two pounds. You will also need several parsley springs, 2 bay leaves and 1 tsp. dried thyme.
Place the chicken parts, vegetables and herbs in a large stockpot and cover them with 12 cups of cold water. Add 1 TB. of kosher salt and 12 black peppercorns. Bring the liquid to a boil and then turn the heat down. Simmer the stock uncovered for two hours. You will notice some brownish foam start to accumulate. Skim off the foam with a slotted spoon. After two hours, strain the liquid through a sieve or colander into a large saucepan, discarding the solids. Bring the liquid back to a simmer and continue to simmer it for another hour to an hour and a half until the stock tastes rich enough to you. Do not worry if the broth seems greasy because you are going to remove most of the fat later. You will probably have around 6-8 cups of chicken broth. The next step is to refrigerate the stock in a plastic container – or freeze it if you are not planning to use it in the next few days – until the broth turns gelatinous and the fat congeals on the top. Remove the congealed fat, and save it in a plastic bag or container. Now you are ready to make your matzo balls!