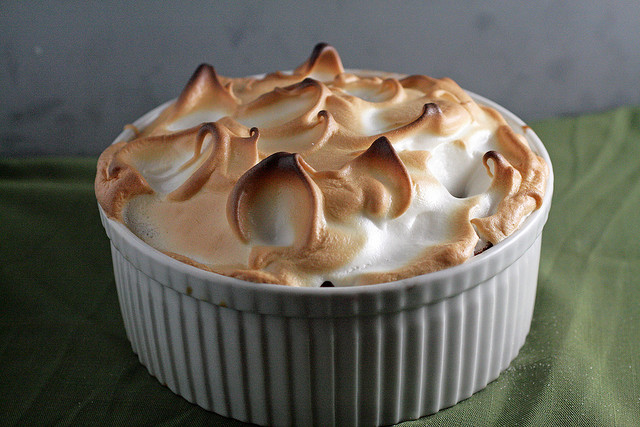 Bread pudding. The words themselves are hardly inspiring. Stodgy, pedestrian, British, with those overtones of school dining halls and hospital food. There are some truly execrable bread puddings — dry, almost crusty, with little discernible flavor other than that provided by a few sugary raisins, and no give. And frankly, most bread puddings I’ve had in even the best bakeries and restaurants have been in this mold — cut into neat squares and utterly unappetizing.

But a good homemade bread pudding is a different beast. This is spoon food, creamy and gooey and served warm from the oven in a bowl. Bread and milk and eggs and sugar combine to form an alchemy — no longer distinct elements but something altogether new and wonderful. Comforting and exciting all at once, bread pudding has the potential to hit exactly the right dessert spot.

Bread puddings can range from the basic bread and butter pudding, also known as “make a dessert from things in your pantry” to the very fancy indeed. This one is somewhere in between. It is an easy bread pudding, make no mistake about that. And most of the ingredients are in my pantry, but the basic sandwich bread and milk and eggs is kicked up a notch — the bread is a brioche (the best bread for bread pudding hands down, if you can find it), spread with a sweet and tart raspberry jam. The custard is thickened with cream and scented with the floral aromas of Tahitian vanilla extract and Amontillado sherry. And to top it off, the pudding is taken from the pedestrian to the porsche with a topping of creamy, dreamy, meringue, browned to perfection. 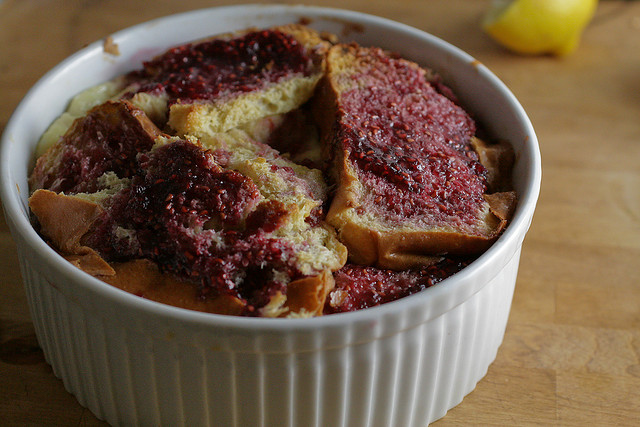 Most people are intimidated by a meringue, but it’s really not difficult. In other words, it sounds harder than it is. It’s just the whites of the eggs, beaten until stiff and sweetened with a little sugar. There’s no magical chemistry or special technique involved — it’s simple mechanics. If you have some egg whites, sugar, a clean bowl and an electric beater (or a whisk and an untiring arm) you can make a meringue. And browning it, as I did for this recipe, is the work of minutes.

In fact, this whole dessert is incredibly simple. It’s an easy bread pudding — really just throwing bread in a bowl and pouring a liquid over the whole thing, then topping with beaten egg whites. And yet the result is elegant, delicious and worthy of being served by the best home cooks. Or the best school dining halls, if those actually exist. 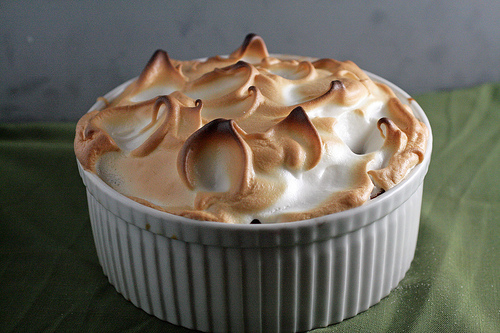