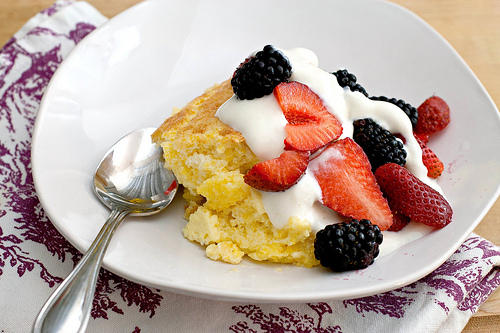 Whew. Well we moved. And although we’re not yet totally unpacked (far from it), my kitchen is starting to look like a functional kitchen, and I’m beginning to have glimmers of interest in actually cooking again. It’s almost like a long illness — during the looong process of packing, moving and unpacking, I haven’t even wanted to THINK about cooking (thank goodness for my mother, who has been feeding us and delivering things like homemade meatloaf, or we would have been eating cereal and hot dogs and fish sticks for a solid month.) Even though I wasn’t cooking at all, I was hesitant to pack up my kitchen, in case I NEEDED something. The specialty bakeware and waffle iron went first, then the odd tools, followed by my beloved Le Creuset french ovens and cookie sheets. A few special items – my microplane grater, my Mexican style citrus juicer, my toaster oven — stayed unpacked until the bitter end. And the coffee maker came to the new house in the car and was the first thing plugged in. Naturally.

Settling in carries its own tribulations — although I won’t miss our miniature dishwasher at the old apartment, the (not so new) dishwasher at our new place started belching and emitting alarming plumes of smoke the first time we tried to run it. We approached it with trepidation, looked closely, and it seems to be running OK now. I still have a box of pantry items I haven’t unpacked because there’s simply NO place for them to go, and as we’re missing a kitchen table, the fruit bowl is sitting awkwardly on the banquette. But we’re starting to have glimmers of functionality, and I’m actually considering making a trip to the farmer’s market this weekend, and actually cooking something. Cooking something real, and carefully crafted, and from scratch, to inaugurate the new kitchen (and no, toast and fish sticks do not count). And I’ll let you know when that happens. In the meantime, I happen to have this recipe up my sleeve that was cooked in the great Before, but I’ve been saving it for the Fourth of July, because it’s about as American as you can get. Spoon bread is a type of corn bread that so smooth and moist it must be eaten with a spoon. It was a dish that was popular at the time of the Revolutionary war, and is made with that all-American staple, cornmeal. This spoon bread is a slightly modern version, lightened with beaten egg whites. Although most spoon breads you might encounter are savory, I like it as a satisfying, not-too-sweet dessert, served with some fresh berries and honeyed yogurt.