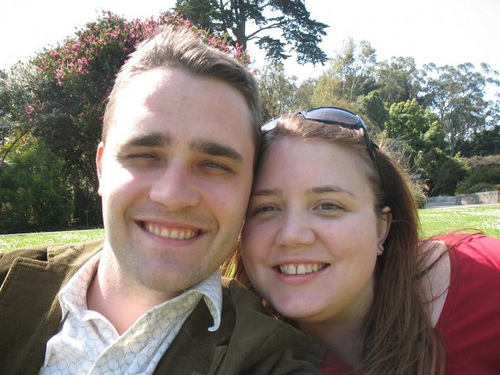 This is my husband. I started dating him when we were both 19. NINETEEN! Can you imagine? If my daughter came home and told me she had met the man she was going to marry at 19, I would laugh in her face. We were infants! And yet, 9 years ago today. Getting married. No longer 19, but 24 doesn’t seem that old either, now that I think about it. Children! Nine years, two children (one and a half, really. Or one and 7/9, to be technical), two law school graduations, five apartments, one house, two states, three cities, two dogs, six jobs, four cars, several hundred books, and several thousand meals later, here we are. Married. And now we’re parents, and homeowners, and gainfully employed, and all those other things that are markers of being grownups. And I still like him. I’d marry him again. He supports me, he challenges me, he sometimes annoys the hell out of me, and he loves me, too. He does laundry, and housekeeping and he fixes things around the house. He is an active and involved father. He is half of what makes our lives as we live them, in all their fullness, possible. And most of all, he interests me. I like spending time with him, and seeing how his mind works. He keeps me alert. A friend of mine recently said that 90% of your happiness comes from who you marry.